Posted on October 7, 2019 by Andrei Martyanov 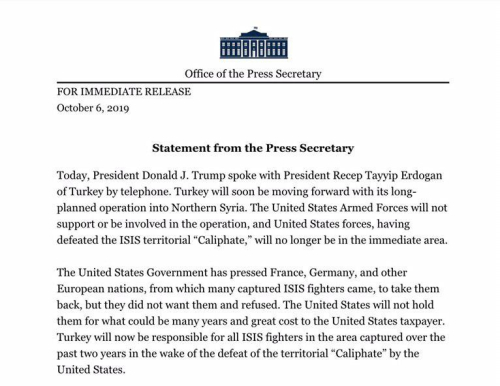 The Rojava Kurds should have seen this coming. The US has a long standing tradition of abandoning Kurds. The abandonment is not the worst part of this policy decision. It is the decision to turn over the jihadis captured by US, YPG and SDF forces over the last few years to Turkey… just in time for Erdogan's announced invasion of northeast Syria. Those jihadis will be rearmed and sent into battle across northern Syria, including Idlib, by Erdogan. Ah, the dreams of a neo-Ottoman Empire are coming into focus.

It appears Fox News, the neocons and the old lady from South Carolina were blindsided by this move.

Aside from the existential threat to the Kurdish fighters posed by Turkey, Syrian Kurdish forces are also warning that ISIS sleeper cells are actively plotting to free about 12,000 militants currently detained by the Kurds and may take advantage of the Turkey-triggered turmoil to aid their plans.

Those in custody include about 2,500 foreign fighters from Europe and elsewhere whose native countries have been reluctant to take them back — and about 10,000 other captured fighters from Syria and Iraq. (Fox News)

It is too bad Trump allowed himself to be talked out of leaving Syria back at the beginning of his term. That would have given the Kurds the incentive to make peace with Damascus and left a united R+6 in a better position to take on the jihadis and keep the Turks at bay. Trump's rationale of "withdrawing America from an endless war that does not serve US interests" is reasonable and worthy. But his timing is terrible, even characteristically cruel. Worse yet, he still plans on keeping the troops in Syria, just out of the way of the coming Turkish invasion. It's the worst of both worlds for everyone except Erdogan.

This entry was posted in Borg Wars, Syria, TTG, Turkey. Bookmark the permalink.