China successfully lands on the far side of the Moon – TTG

Posted on January 3, 2019 by Andrei Martyanov

At 10:26 Beijing time (02:26 GMT), the unmanned Chang'e-4 probe touched down in the South Pole-Aitken Basin, state media said. It is carrying instruments to characterize the region's geology, as well as a biological experiment. State media called the landing "a major milestone in space exploration".

While past missions have been to the Earth-facing side, this is the first time a craft has landed on the unexplored far side. The probe has sent some first pictures from the surface. With no direct communications link possible, all pictures and data are first sent to a separate satellite and then relayed from there to earth.  (BBC) 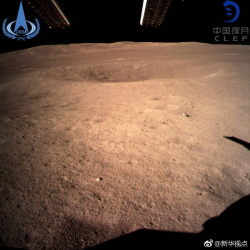 It wasn’t like Walter Cronkite narrating the Apollo 11 landing. Space watchers were desperately searching for evidence of the landing (or crash) from Chinese sources. Finally it was announced from CCTV along with a short video of mission control and a few seconds of the actual landing. Looking forward to seeing Jade Rabbit roaming around the “dark” side of the moon. I was always partial to all the Moon rabbit legends. I think the Moon will see a lot of activity in the next few years.