Democrats and Media to Trump–No Peace and DIE!! by Larry C Johnson

If any doubt lingered in the tiny recesses of your mind that Donald Trump is up against a massive tsunami of bias and hatred, the reporting that has surrounded the announcements of Trump’s successful battle with the Wuhan Chinese Red Death aka Covid 19 removes any reason to believe that the media is playing this straight. Most of the media and most Democrat politicians are deranged. The anger and venom they spew at Trump on a 24-7 basis is without precedent in the history of the American Presidency. Not even Lincoln, who was called a “gorilla” and a “baboon” by his own Secretary of War, has endured such calumny. Trump’s situation reminds me of this encounter between a pretend President (Bill Pullman) and a space alien in the movie, Independence Day:

Donald Trump is not dealing with the normal mix of partisan Democrat politicians and a media elite. He is up against a crazed mob of delusional, unhinged haters. Unless he dies, there is nothing Donald Trump can do to satisfy or placate his opponents.

If Trump produced a cure for lung cancer he would be derided for harming pulmonologists and cancer researchers.

If he raised someone from the dead he would be denounced for hurting undertakers and grave diggers.

If he replicated Jesus’ miracle of feeding the multitudes with loaves and fishes, he would be guilty of pushing gluten and triggering vegans.

But Trump, notwithstanding media claims, does not see himself as the new incarnation of the Son of God. He’s just happy disrupting the conventional wisdom and doing concrete things that benefit real people. But the pathetic mainstream media give Trump no credit for real, substantive accomplishments. The list includes:

Signing a bipartisan bill in December 2019 that permanently provides more than $250 million a year to the nation’s historically black colleges and universities.

Overseeing an economic recovery prior to the Covid pandemic that produced the lowest jobless rate for Hispanics (3.9% in September 2019) and African Americans (5.5%).

Pushed criminal justice reform that led to the release of mostly black American inmates incarcerated under a crime bill pushed by Joe Biden. This included the commutation and pardon of Alice Marie Johnson.

Moved the US Embassy to Jerusalem, delivering on a promise made by previous Presidents and then negotiated a peace agreement between Israel and two Arab gulf nations.

Accelerated the withdrawal of US forces from Afghanistan and Iraq and reduced the number of drone strikes.

Under Trump’s leadership, in 2018 the U.S. surpassed Russia and Saudi Arabia to become the world’s largest producer of crude oil.

Trump signed an executive order this year that forces all healthcare providers to disclose the cost of their services so that Americans can comparison shop and know how much less providers charge insurance companies. Hospitals will now be required to post their standard charges for services, which include the discounted price a hospital is willing to accept.

He created a White House VA Hotline to help veterans and principally staffed it with veterans and direct family members of veterans. VA employees are being held accountable for poor performance, with more than 4,000 VA employees removed, demoted, and suspended so far.

Under normal circumstances, these accomplishments would be grudgingly praised by political opponents. But not now. Anything that Trump does is evil and worthless according to the new Democrat political calculus.

The straw that has broken the back of any hope of civility and humanity from Democrats is Trump’s triumph over Covid. He had the audacity to contract the disease and disrupt the Democrat meme that Trump’s Covid policy is the equivalent of Hitler’s SS dropping poison gas into gas chambers packed with Jews. It is sickening and disgusting.

The reality is that Trump benefited from the drugs that his Covid Task Force has been pushing to develop and deploy. Even without a vaccine, Trump’s recovery gives tangible evidence that recovery from Covid is possible. In fact, according to the actual data, most people–even those 65 and older–have a robust chance of surviving and recovering.

Rather than deal with the facts, the media and Democrat mob are attacking Trump for not wearing a mask. Yet, these same concern trolls are deaf, dumb and blind in commenting on prominent Democrats who self-righteously preached the necessity of wearing a mask but were photographed in public doing the opposite. We have Nancy Pelosi parading maskless through a San Francisco hair salon. We have Diane Feinstein strolling through airports in California and Washington, DC sans mask. And then there is black face Virginia Governor Ralph Northem, exhorting Virginians on the horrors of not wearing a mask and then, the next day, walking through a crowd in Virginia Beach with no mask. Days later Northem announced he had the Covid. Any condemnations of him on being a “super spreader?” Nope. Crickets.

But it is not only the clueless Democrat leaders preaching one thing and doing another. The media also is guilty of the same hypocrisy. Tucker Carlson showed a photo tonight (Tuesday) of the moron CNN anchor, Chris Cuomo, who feigned outrage over Trump taking off his mask upon arriving at the White House, puffing on a cigar at the beach without a mask. I guess cigar smoke kills Covid.

Americans are not fools. They understand and repudiate this kind of dishonesty. If Donald Trump facilitated his children going overseas and securing a seat on the board of a corrupt Ukrainian gas company, there would be justified outrage. When Joe Biden’s dirty scion does it, we get the sounds of silence.

If Donald Trump’s son Eric received $3.5 million dollars from the Russian wife of the mayor of Moscow, he would be drawn and quartered and would deserve the flaying. But that’s what Hunter Biden did and the media remains mute.

We are now in a political world imagined in fantasy by Lewis Carroll. But this is reality. The saving grace for Trump is that the Democrats are behaving like a retarded Wile E Coyote. 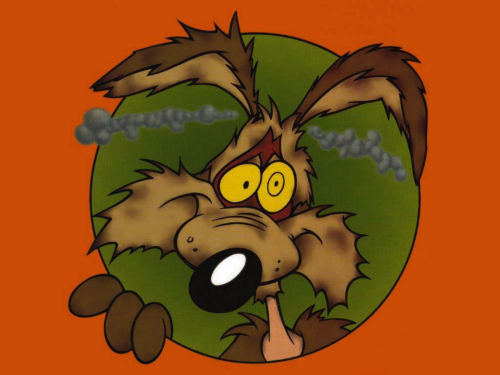 They spend every waking hour dreaming up a new crackpot scheme to destroy Trump. But when they detonate their stink bomb they are holding it and end up immolating themselves. The Democrats and their media enablers stupidly believe that the majority of Americans don’t understand or comprehend this kind of dishonest duplicity. But I think they are wrong.

38 Responses to Democrats and Media to Trump–No Peace and DIE!! by Larry C Johnson