From Diana to LightSail 2 – TTG 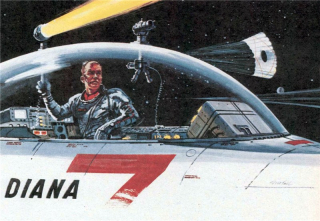 One by one, the other skippers answered. Merton recognized all the voices—some tense, some calm—for they were the voices of his friends and rivals. On the four inhabited worlds, there were scarcely twenty men who could sail a sun yacht; and they were all here, on the starting line or aboard the escort vessels, orbiting twenty-two thousand miles above the equator.

“Number One, Gossamer—ready to go.”

Merton smiled at that last echo from the early, primitive days of astronautics. But it had become part of the tradition of space; and there were times when a man needed to evoke the shades of those who had gone before him to the stars.

Now it was his turn, at the end of the line; strange to think that the words he was speaking in this tiny cabin were being heard by at least five billion people.

“One through Seven acknowledged.” The voice from the judge’s launch was impersonal. “Now T minus one minute.”

Merton scarcely heard it; for the last time, he was checking the tension in the rigging. The needles of all the dynamometers were steady; the immense sail was taut, its mirror surface sparkling and glittering gloriously in the sun.

To Merton, floating weightless at the periscope, it seemed to fill the sky. As it well might—for out there were fifty million square feet of sail, linked to his capsule by almost a hundred miles of rigging. All the canvas of all the tea-clippers that had once raced like clouds across the China seas, sewn into one gigantic sheet, could not match the single sail that Diana had spread beneath the sun. Yet it was little more substantial than a soap bubble; that two square miles of aluminized plastic was only a few millionths of an inch thick.

“T minus ten seconds. All recording cameras on.”

Something so huge, yet so frail, was hard for the mind to grasp. And it was harder still to realize that this fragile mirror could tow them free of Earth, merely by the power of the sunlight it would trap.

Seven knife blades sliced through the seven thin lines tethering the yachts to the mother ships that had assembled and serviced them.

Until this moment, all had been circling Earth together in a rigidly held formation, but now the yachts would begin to disperse, like dandelion seeds drifting before the breeze. And the winner would be the one that first drifted past the moon.

I read this short story by Arthur C. Clarke in 1964 when it came out in Boys’ Life. Our manned space program was still young. Shepard and Glenn have done their things, but there was so much before us. There was plenty of literature for young readers who wanted to keep up with the space race. Reading “The Sunjammer” struck a chord. The idea of sailing across the universe riding the solar winds thrilled me. Even at that young age, I was occasionally scooting an old wooden dinghy around Long Island Sound with a scrap canvas sail. I knew the freedom of the wind and the water. The idea of scooting across the solar system in a single handed “space dinghy” tethered to a massive gossamer sail was exhilarating.

In a few days, The Planetary Society’s LightSail 2 is scheduled to unfurl its solar sail. It launched into orbit on 25 June aboard SpaceX’s Falcon Heavy rocket and has undergone extensive testing and tweaking of its navigation and flight control systems. In another month LightSail 2 will maneuver into a higher orbit under solar sailpower. The purpose of this craft is to demonstrate a viable propulsion system for other CubeSats. This could be a very cost effective propulsion system for these CubeSats. Not only is there no need to carry fuel, but acceleration is cumulative. Although initial velocity is slow, the longer a solar sail flies, the faster it goes…. far faster than a conventional rocket engine can go if the voyage is long enough. All this was explained clearly in Clarke’s “Sunjammer” over fifty years ago.

This is not theoretical and certainly not just a science fiction story. In 2010 the Japanese Aerospace Exploration Agency launched IKAROS (Small Solar Power Sail Demonstrator). This craft sailed past Venus in six months. In 2013 it reached a velocity of 400 meters per second. By 2014 it was in a ten month orbit of the Sun. The last signal received from IKAROS was in 2015.

Both IKAROS and LightSail 2 are a far cry from Clarke’s sun yachts, but give it time.

26 Responses to From Diana to LightSail 2 – TTG