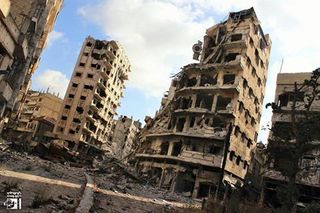 "A Syrian government official claimed that the army wrested a contested district of a key city from rebels on Monday after ten days of fierce fighting. But two activists based in the city denied the claim, saying rebels were under heavy fire but still holding on.
President Bashar Assad's forces have launched a major offensive to retake the strategic city of Homs, a transport hub that sits between the capital, Damascus, and costal areas overwhelmingly loyal to the regime. Rebels seeking his ouster have held on to parts of the city they took over a year ago, but have been under siege.
The official, from Homs province, said troops took the Khaldiyeh district but were still "cleaning" out rebel-held pockets. He gave no other details and requested anonymity because he wasn't authorized to speak to the media."

I have "graded" a lot of damage, here, there and pretty much everywhere and I would call what is shown in the picture above Heavy Damage, actually, Very Heavy Damage.  This is in central Homs.

If there are rebels "still holding on" in scenes like the one in the picture then they are considerable people.  This looks like the German cities that I saw as a child just after WW2.

It appears that the government is "disemboweling" those parts of Syria that most strongly support the rebels.  Homs, Hama, Deraa; these are all traditional centers of Sunni concentration and Islamist enthusiasm.  pl