“Dear Hearts Across the Seas” by W. Patrick Lang 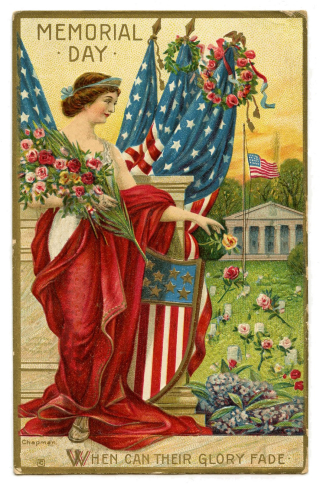 “For 14 hours yesterday, I was at work—teaching Christ to lift his cross by the numbers, and how to adjust his crown; and not to imagine he thirst until after the last halt. I attended his Supper to see that there were no complaints; and inspected his feet that they should be worthy of the nails. I see to it that he is dumb, and stands before his accusers. With a piece of silver I buy him every day, and with maps I make him familiar with the topography of Golgotha.”
Captain Wilfred Owen, The Manchesters
Killed in Action, Nov. 4, 1918

This famous quotation from the work of the soldier-poet Wilfred Owen sums up both the awfulness and the beauty of a combat soldier’s life. It is particularly meaningful to those who have been given the chance to train and lead men in war. I came to know Owen’s work a few years back through Paul Fussell’s The Great War and Modern Memory. Professor Fussell was badly wounded in World War II and is still filled with the righteous outrage that fills most combat men. God bless him.

Many will recoil in horror from the idea that there can be beauty in the life led by combat soldiers, the immortal “grunts” and Grognards who live in historic memory. It is all too easy to see nothing but the pain and the misery of loss, wounds and experience so horrible that it scars for life. Perhaps the worst is the memory of suffering necessarily inflicted on others whose motives are often no more base or lacking in what the Romans called pietas than our own. Not political enough for you? Go talk to a soldier and see if he agrees with you.

Comrades in Fear and Friendship

On the good side of the ledger there is the fact that there are no better friends than those with whom you have been deeply and comprehensively afraid. “Go tell my mother,” says Private Ryan in Spielberg’s exquisite film. “Go tell her that I will stay here, with the only brothers I have left.” This rings so true that it requires no explanation. Those ties bind unto death, until “the last jump,” as I have heard World War II paratroopers express it. The friendship and indeed love of comrades often long gone is, perhaps, the greatest “good” in war. It is often said that war brings out the best and the worst in people. This is profoundly true. Men who in civilian life would not have crossed the street to help a stranger often fall in the effort to help near strangers. There are many good things to be remembered. All of them have to do with comrades.

These days we are served by professionals and militia soldiers of the National Guard and reserve. These are men and women who bring to mind Lt. Col. Arthur Fremantle’s description of the infantry soldiers of Lee’s army at Gettysburg. Fremantle was a Coldstream Guards officer who had come to America to observe. He got a bellyfull of observing, but said of “Lee’s Miserables” that they were “simply beyond praise.” Our people are like that now. A friend’s son is now on his way back overseas for his fourth tour of duty in the Asian war against the jihadis. Soon, his experience will not be unusual. Forty-five years ago his father and I, looking down the barrel of another war, would never have believed that we would see this. We were short-sighted, blinded by the myopia of youth. What is the old saw from Plato? “Only the dead have seen the end of war….” Really? My word….

No Need for Boosterism

I sometimes receive letters from people who are filled with a great and high-minded attitude about war. “Well, that is why soldiers exist….” “Losses are worth their pain in a good cause….” “Our soldiers will prevail through their skill and the great weapons we buy them.” I would say to such people that the soldiers already know that. They do not need your boosterism to help them do their duty. They will do their duty to the last, as so many of our soldiers have done. Just let them get on with it without suffering the indignity of your remarks.

Just after the war in Vietnam, Laos and Cambodia, an Army chaplain said Mass one Memorial Day in the post chapel of the Presidio of Monterey. Since America is a Jesuit magazine, it is fitting to mention that he was a Jesuit, as so many other Army chaplains have been. He had served in World War II, Korea and Vietnam. He had served with many infantry units. The infantry are the people who always do the serious, up-close killing and dying. The Army reckons that over 90 percent of all combat deaths happen in the infantry.

During his homily this priest looked out at the congregation, overwhelmingly populated with combat men and their families. He said that he wanted the people of God to remember their brothers asleep in the Lord’s embrace. He wanted them to remember how each man died alone, alone in fear, alone in misery, usually with no one to comfort him, often in the dark, with his life running out through mutilations that left little doubt of the outcome. He asked them to pray for their brothers, for the brothers who had died for us all as Jesus died for us all. The congregation sang. “In the beauty of the lilies/ Christ was born across the sea,/ with a glory in his bosom that transfigures you and me./ As he died to make men holy, let us die to make men free./ His truth is marching on.”

Nothing has changed. The wounds inflicted by improvised explosive devices are appalling. Go to Walter Reed or Bethesda and see for yourself. The troops are not complaining. They never complain, and so nobody has any right to be less committed to the eternal mission of the soldier than they are.

This Memorial Day, remember that the cemeteries and physical therapy wards are full of men and women who gave their all for you, and who in many cases ask nothing more than to be allowed to go back and do it again. Pray for them. Please.

“I have eaten your bread and salt.
I have drunk your water and wine.
The deaths ye died, I have watched beside,
And the lives ye led were mine.

I have written the tale of our life
For a sheltered people’s mirth,
In jesting guise—but ye are wise,
And ye know what the jest is worth.”

This article also appeared in print, under the headline "Dear Hearts Across the Seas," in the May 29, 2006 issue.

This entry was posted in Religion. Bookmark the permalink.

14 Responses to “Dear Hearts Across the Seas” by W. Patrick Lang