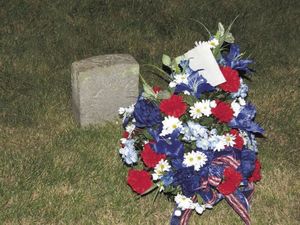 In 1993, Montfort Academy fifth-grader Kent Ingalls was preparing for the annual placement of flags on graves at Fredericksburg National Cemetery. Kent’s teacher told the class about a longtime cemetery mystery: flowers that appear every year at the gravestone of a Union soldier from Massachusetts.

Those flowers were no mystery to Kent, however. He told his classmates that after the Civil War, the soldier’s family had sent $100 to his great-great-great-grandfather, cemetery superintendent Andrew Birdsall, to place flowers at Jerome Peirce’s grave every Memorial Day, and his descendants had carried on the tradition for well over a century.

This Connecticut Yankee has grown to love my new home in the Fredericksburg, Virginia area. History hangs thick in the air and my local paper revels in retelling it. After a long drive home from Saratoga, New York, it was a joy to read this article in my morning paper. But this article went beyond retelling a story that continues to this day. It offered a lesson in what it means to keep one’s word and faithfully discharge a duty. Major Birdsall not only learned this lesson well, but he passed it along to future generations of the Birdsall family. This is the stuff of a healthy and successful society. I fear it is a lesson only rarely taught today.

There is another tradition involving the Fredericksburg National Cemetery. This Saturday night, the local Boys and Girl Scouts will light 15,300 candles in the cemetery – one for each soldier buried there. This luminaria will be accompanied by a bugler playing Taps every thirty minutes and park staff posted throughout the cemetery telling the stories of the soldiers buried there. It is a moving sight among my brethren lying in the hallowed ground above Marye’s Heights.

Last night’s luminaria commemoration at the Fredericksburg National Cemetery took place, but was cut short due to the storms passing through our area. We lost power, but only for four hours or so. I woke up this morning to the sound of chainsaws in the neighborhood. A similar luminaria commemoration is scheduled at the Fredericksburg Confederate Cemetery tonight. I wish them better weather.

Joe Rokus, the author of that 2016 article, designed a project to transcribe hundreds of letters held by the National Park Service. Coordinating the efforts of volunteers, the program successfully transcribed over 150 letters resulting in digitizing a part of history that can be accessed by future historians. In his honor, this is called the Sergeant Jerome Pierce Transcription Project. Once lost, now found, never forgotten.

This entry was posted in History, TTG. Bookmark the permalink.