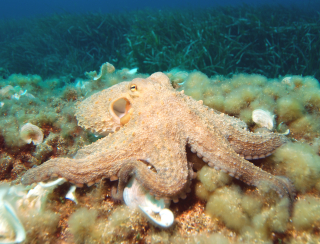 "At the Marine Biological Laboratory in Woods Hole, Mass., there's a room filled with burbling aquariums. A lot of them have lids weighed down with big rocks.

"Octopuses are notorious for being able to, kind of, escape out of their enclosures," says Bret Grasse, whose official title at MBL is "manager of cephalopod operations" — cephalopods being squid, cuttlefish and octopuses.

He's part of a team that's trying to figure out the best ways to raise these sea creatures in captivity, so that scientists can investigate their genes and learn the secrets of their strange, almost alien ways.

For decades, much of the basic research in biology has focused on just a few, well-studied model organisms like mice, fruit flies, worms and zebrafish.

That's because these critters are easy to keep in the laboratory, and scientists have worked out how to routinely alter their genes, leading to all kinds of insights into behavior, diseases and possible treatments."  NPR

As  a baldy oldy, I watch a lot of documentary TeeVee.  "Curiosity Stream" is a hell of a learning instrument.   I have learned a lot about my Norman ancestors there.  My mother in law (who lived with us for ten years) was confident that I was a member of the oppressor class.  If ancestry tells you anything she was right.

Cephalopods have become an interest.   I started out with the red Humboldt squid in the Gulf of California.  These were well documented for a while (to include their rapacious hunger).  They are called "El Diablo Rojo" by the local fishermen.  They now seem to have disappeared from that body of water.  Where they have gone is a mystery.

I then moved on to the Giant Squid (archeteuthis).  They were until recently invisible as living specimens, lots of dead, rotting Giant Squid but not live ones.  But a few years ago a Japanese scientist had the dream of his life fulfilled when a living one approached the submersible he rode and just hung about for a while posing for snaps.

There is supposedly something something called the Colossal Squid (the Kraken?) but we don't have pics of those as yet.

Octopus are very special creatures.  They are incredibly smart.  I was in a lab once looking at a two footer in a clear sided tank.  It sat there on the bottom in the sand inspecting me in return.  I slowly waved one hand back and forth in a foot long arc.  It blinked and then repeated the gesture.

I do not eat octopus.  pl

This entry was posted in Science. Bookmark the permalink.

16 Responses to Octopus are Great!