Musk does it again. Bravo! 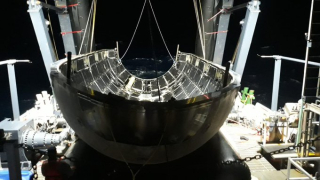 "Payload fairings are the nose cones that surround and protect satellites during launch. SpaceX has yet to re-fly any fairings, but doing so has always been part of the plan. The company outfits each fairing half with an avionics system and thrusters, which it uses to steer itself to a soft, parachute-aided ocean splashdown.

SpaceX has gone to such trouble because fairings are expensive and therefore worth reusing. Each one costs $6 million, Musk has said — about 10% of the cost of a launch of one of SpaceX's workhorse Falcon 9 rockets. (The two-stage Falcon 9 and Falcon Heavy use the same payload fairing. The Heavy is basically three modified Falcon 9 first stages strapped together; the central booster is topped with a single-engine second stage and the payload.)

Yesterday's recovered payload fairing will be reassigned to a launch for Starlink, Musk added. That program is SpaceX's huge internet-satellite constellation, which will ultimately consist of thousands of spacecraft. The first operational Starlink launch is planned for next month; it will lift off atop a Falcon 9 from Vandenberg Air Force Base in California.

It's unclear if the recovered fairing will top that Falcon 9; Musk didn't specify which Starlink mission the hardware will fly on."

Yet another major step in the reduction of spaceflight costs.  pl

1 Response to Musk does it again. Bravo!