Posted on December 16, 2005 by Michael Chevalier

The expulsion by U.S. military officials of two embedded journalists in Kuwait, reportedly for photographing a shot-up military vehicle, has prompted outrage from Military Reporters and Editors (MRE), which is calling for a change in embed rules that apparently led to the action.

Sig Christenson, MRE president and a military writer with the San Antonio Express-News, said no rule barring photographs of damaged vehicles existed when he first embedded in 2003. He said the alleged rule is one of several that have been added to the embedding program since it first began nearly three years ago, and should be changed.

"This rule does not have any legitimate purpose in preventing future attacks," Christenson said. "I’m pretty sure the rule was not in the agreement I signed. I think the insurgents already know about the vulnerability of the vehicles."  MRE 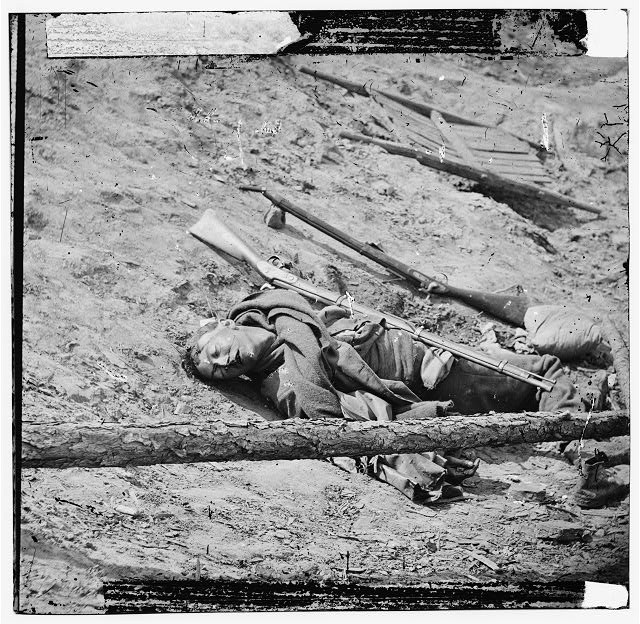 Matthew Brady took this picture of a dead man in the trenches at Petersburg, Virginia in 1865.

One thing you can be rather sure of when you see Brady pictures of dead men in the Civil War.  They are all Confederates.  Why?  Brady, the US War Department and commanders in the fiels had an "understanding."  It was that Brady would not publish pictures of Union dead.  The idea was that such pictures of Union soldiers would damage morale on the home front.  This was particularly true with regard to a war which was thinly supported by civilians in the North and for which enthusiasm might have been dampened by pictures like this if the uniform had been darker.  The blanket roll was a sure indicator that this was a "Johnnie."

William Tecumseh (Cump) Sherman had an even clearer position on the subject of journalists who while in his Department area damaged morale or his plans.  He wrote that he intended to try and hang them.

The old "Articles of War" made it pretty clear that any civilian accompanying a force in the field in time of war was subject to military law.  This was true up through World War Two.

If the Army is providing, food, protection, housing and transport for a journalist, then that journalist is part of the force.

5 Responses to Sherman on Journalists