FSA members are re-defecting to the government. 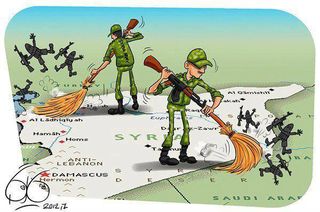 "Hundreds of men who took up arms against President Bashar al-Assad are defecting back to the government side.
Disillusioned by the Islamist twist that the "revolution" in Syria has taken, exhausted after more than two years of conflict and feeling that they are losing, growing numbers of rebels are signing up to a negotiated amnesty offered by the Assad regime.
At the same time, the families of retreating fighters have begun quietly moving back to government-controlled territory, seen as a safer place to live as the regime continues its intense military push against rebel-held areas.
"

Well, boys and girls.  This sounds like a coming "bad day" for the forces of Sunni jihadism.  pl

31 Responses to FSA members are re-defecting to the government.