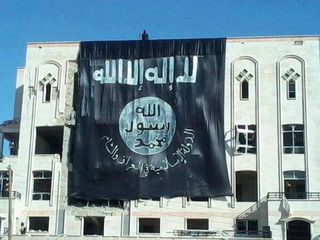 "The group, now known as the Islamic State of Iraq and the Levant, is by no means the largest of the loosely aligned rebel organizations battling to overthrow Syrian President Bashar al-Assad, and it is concentrated mostly in the northern and eastern provinces of the country. But with its radical ideology and tactics such as kidnappings and beheadings, the group has stamped its identity on the communities in which it is present, including, crucially, ­areas surrounding the main border crossings with Turkey.
Civilian activists, rival rebel commanders and Westerners, including more than a dozen journalists and relief workers, have been assassinated or abducted in recent months in areas where the Islamic State has a presence."   Washpost

The name of this group in Arabic is "Dawla Islamiya f'il-Iraq wa ash-Sham."  "Sham" is a geographical term that can mean various things; north western Arabia, Syria, or Damascus would be some although there are specific terms for these things, "Dimashq," "Suriya," etc.  So "Levant" is only an approximation as a translation for "Sham."  Does that mean anything?  Yes.  It means that their aspirations are open ended in the region.