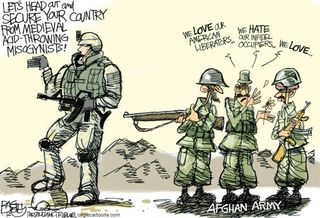 "The problems plaguing Hamidullah’s battalion represent what might be the biggest threat to the fledgling Afghan army: an inability to repair or replace vital equipment once it is broken. The U.S. military shouldered that responsibility for years. But just as the Afghan army started doing the bulk of the fighting, the Americans stopped repairing Afghan equipment.
The U.S. military said that turning over the job to the Afghans was an inevitable part of the transition process. But with the Afghan supply chain still undeveloped and the Defense Ministry still hobbled by corruption, army units across the country aren’t getting the gear and parts that they need."  Washpost

Is anyone surprised at this?  Maintenance and supply are two of the main things the Afghans will want the US to continue doing for them even after the zero option becomes reality.  Contracters will love to do the job and the people doing the contracted work will make a lot of money.  They may get killed but that is why they will be paid a lot of money.  It is exactly thus in Iraq, with the contracters being supervised by a three star general who pleads for more generals and colonels to be sent him for the purpose of "empire building."  The more seniors you have working for you the more likely you are to be promoted.

It is a rare thing to find a 3rd World army or air force that can do its own logistics.  Saudi Arabia never has figured out how to make this happen without massive use of its "checkbook."  pl