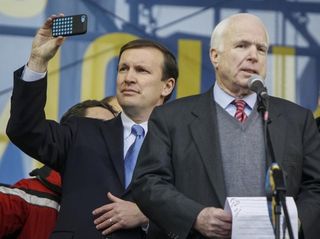 "“You are making history,” Murphy, the senator, told the crowd. “If you are successful, the United States will stand with you every step of the way.” McCain commended veterans of the Soviet war in Afghanistan who have been helping to defend the protest site. “Ukraine will make Europe better,” he said, “and Europe will make Ukraine better.” He then quoted the 19th-century Ukrainian poet Taras Shevchenko: “Love your Ukraine, love her in cruel times, love her in cruel moments, pray to God for her.”"  washpost

Does McCain not know that he lost the presidential election in 2008?  Does Obama know that McCain is running his own foreign policy?  I thought that was against the law.  Or did Obama send him and the other fellow there?

I remember the Hungarian revolt of 1956.  That was brought on in part by intemperate statements made in the US Government, statements that implied that the US would "support" the Hungarian people.  In the event we did nothing.  To encourage revolt is a hazardous undertaking.  pl