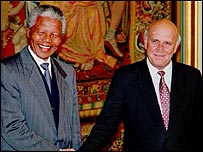 Nelson Mandela died today.  He was one of the 20th Century's great men.  Forebearing, and long suffering, he early turned from the path of violence.  I have never heard anyone suggest that he was personally anything other than a man of great itegrity and kindness.

The other man in the photo is Willem de Klerk, the last apartheid president of South Africa.  He and Mandela were jointly awarded the Nobel Peace Prize in 1993.  De Klerk made the key decision to yield political power in South Africa to majority rule.  He ordered Mandela released frm prison and served as vice-president in the new regime.  He still lives and is a lecturer across the world.

94 Responses to Mandela dead but de Klerk yet lives.