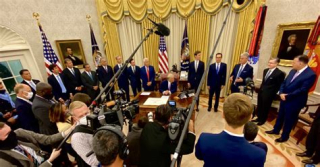 Well, it looks like there is going to be an early Thanksgiving feast in Washington, DC, but instead of gobbling down Turkey as the featured protein, the main serving will be Crow. And there is a lot of Crow for Washington insiders and other Deep-Staters to wolf down in the aftermath of Trump’s stunning brokering of a Middle East Peace Deal that appears to put the threat of war between Jews and Arabs on the back burner.

Count me as one who might have to nibble at a Crow drumstick. I was skeptical two years ago that Trump’s May of 2018 move to put the US Embassy in Jerusalem and officially recognize Jerusalem as Israel’s capital was smart strategically. I thought it was foolish, misguided and laden with hubris. But I did credit Trump for delivering on a promise that his predecessors–both Republican and Democrat–were loathe to fulfill.

Most of the global reaction was harsh and pessimistic. The UN General Assembly went ballistic with a torrent of condemnatory words:

The UN General Assembly held a rare emergency special session at the request of Arab and Muslim states, after Trump’s shock decision heightened tensions in the Middle East.

The resolution effectively called on the US to withdraw its recognition of Jerusalem as the capital of Israel and was backed by the overwhelming majority of members.

Just nine voted no: the US and Israel, plus Guatemala, Honduras, the Marshall Islands, Micronesia, Nauru, Palau and Togo.

Thirty-five nations abstained, including Canada, Mexico and Australia, and 21 countries didn’t turn up for the vote.

Most of our allies were seized with similar bouts of angst and anger:

Theresa May reiterated the UK’s support for continued negotiation, saying that she wants the two countries to have the city as a “shared capital”.

She said: “We continue to support a two-state solution. We recognise the importance of Jerusalem.”

France’s Emmanuel Macron called on the White House to step back from the announcement, while Pope Francis defended the “status quo” of the city as he prayed that “wisdom and prudence prevail”.

Key allies in the region also chimed in with their displeasure:

Trump’s announcement drew criticism from international leaders at the time, with Jordan’s King Abdullah II warning that moving the U.S. Embassy “will undermine the efforts of the American administration to resume the peace process and fuel the feelings of Muslims and Christians,” the New York Times reported.

The biggest crow eater in the United States has to be Obama’s Secretary of State, John Kerry. As a prophet, he sucks:

U.S. Secretary of State John Kerry, who will leave office in two weeks’ time, warned on Friday of “an absolute explosion” in the Middle East should President-elect Donald Trump decide to move the U.S. embassy to Jerusalem. . . .

Such a move could lead to violence flaring up in Israel, the West Bank and across the Middle East, and have a negative impact on relations between Israel, Egypt and Jordan, he said on Friday.

“And if all of a sudden Jerusalem is declared to be the location of our embassy, that has issues of sovereignty, issues of law that it would deem to be affected by that move and by the United States acquiescing in that move, and that would have profound impact on the readiness of Jordan and Egypt to be able to be as supportive and engaged with Israel as they are today,” he said.

I hope you’re sitting down. I have a shocking alert. John Kerry was wrong. Very wrong. One of Kerry’s acolytes, Ilan Goldberg, echoed his boss’s jeremiad but correctly identified Trump’s strategy:

The Trump administration seems to be counting on Arab states, especially Saudi Arabia, to force the Palestinians to accept its plan. The theory is that the Arab states have moved on from the Israeli-Palestinian conflict and are more interested in fighting Iran.

So far, three Arab states have signed on to the Trump peace plan and it appears others are waiting in the wings. If that turns out to be the case and this maneuver succeeds in ultimately bringing about a two state solution for Israel and the Palestinians, it is a fair bet that Trump will have a well-deserved Nobel Peace Prize in hand. And this from a guy the Democrats dismiss as a buffoon and incompetent. If this is foolishness and fecklessness, I am ready for some more.

Trump also is right to assert that he has accomplished more in the Middle East for good in less than four years than Barack Obama and George Bush did in their combined 16 year reign of bumbling. Trump is like the fat kid who claimed he could play basketball and was derided by all the cool athletes. Yet, once he got on the court and had the ball in hand, he’s been sinking three pointers and making it look easy. Time will tell if this is real talent or a mere fluke. Meanwhile, honest men and women, regardless of political affiliation, should admit, Trump was right. What condiment makes Crow taste good?