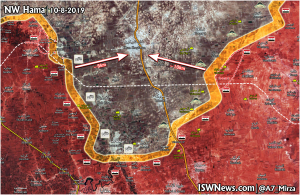 BEIRUT, LEBANON (7:00 A.M.) – The Syrian Arab Army (SAA) scored a big advance in the southwestern countryside of the Idlib Governorate this past weekend. Led by the Tiger Forces, the Syrian military meticulously advanced along the Hama-Idlib axis over the weekend, seizing one site after another from the militants.

This advance by the Syrian Arab Army eventually led to the capture of Al-Hobeit in southwestern Idlib, marking the first time that they have established a foothold in this part of the governorate since 2014.

In the Anna News video below, the Syrian Arab Army’s operation is chronicled from its start to its conclusion:  (Al Masdar News)

Yes, the SAA’s strategy of careful conservation of their forces while pressuring the jihadis with a mixture of surprise maneuvers, persistence and the application of massive, precision firepower is bearing fruit. The Anna News video explains much of this quite well. Pay particular attention to the use of night assaults and long range precision sniping with T-72 and T-90 tanks equipped with thermal imaging sights. Air and artillery precision strikes are aided by aerial drones. As far back as the mid-70s, the Benning School for Boys taught us that if you can be seen, you can be killed. We learned to make use of “the minute folds in the terrain” as cover and concealment to keep our light infantry asses from being blown off. You can see the SAA infantrymen doing the same thing. “Those are regulars, by God!”

This victory is more than just another town in Idlib. It is of great military significance. As someone mentioned in the video, Khan Sheikhoun and the M5 is within sight of al Hobeit at a distance of eight kilometers. How confident are the Syrians that they can keep this town? On August 12 the Syrian Defense Minister visited al Hobeit. That’s confidence.

The jihadis in Khan Sheikhoun not only have to sweat the Tiger Force at al Hobeit, they face a similar threat to their east. In a surprise assault, the SAA took the high ground of Tal Sukayk and the town of Sukayk capturing large quantity of jihadi arms and ammunition in the process. These SAA forces are now ten kilometers from Khan Sheikhoun. A massive jihadi counterattack on Tal Sukayk was repelled with massive losses to the jihadis in both men and equipment. The SAA is moving more forces into both these fronts. The goal appears to be an envelopment of Khan Sheikhoun from the east and west isolating a cauldron of jihadis in their strongholds of Latamanah and Morek. The jihadis have two choices. Either die in place without Turkish resupply or have the living Jesus knocked out of them by Syrian and Russian air assets as they evacuate through Khan Sheikhoun.

This is not the only good news from Idlib Dawn. The 4th Armored Division is finally on the verge of entering Kabani. The 42nd Brigade has seized the entire Zuwayqat Mountains south of Kabani from the jihadis. In this battle, Russian assault helicopters, including the all weather Mi-28N attack helicopters, lead the assault in close coordination with the 42nd Brigade’s advance. The Zuwayqat Mountains and the town of Kabani overlook the entire al Ghaab Plain and the important town of Jish al Shigour. That the 42nd Brigade was able to do this after more than two months of heavy offensive operations is a testament to their discipline and professionalism.

As of this morning, the Tiger Force has advanced past al Hobeit to Kafr Ayn, Mantar and Tal Aas. They are now three kilometers from Khan Sheikhoun. I smell a bubbling cauldron forming… with a Turkish observation post inside.