Our Embassy in Baghdad – TTG

Posted on January 1, 2020 by Andrei Martyanov 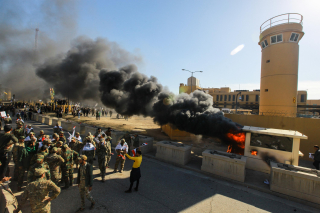 I could never fully comprehend the logic behind our modern monument to imperialistic hubris that is our outsized Embassy in Baghdad. One would have to be a true believer in our God ordained manifest destiny to admire that monstrosity. Those types do exist. At one time the management coven at Defense HUMINT planned on establishing a massive operating base in that Embassy to control operations throughout the region. It was going to be Defense HUMINT forward… an outpost of the empire.

That embassy compound is once again becoming the focal point of our Mideast empire. Events of the last few days have seen to that. Last weekend, in response to a  rocket attack on a base outside Kirkuk that left one US contractor dead and four US servicemen wounded, we launched drone strikes on five Iraqi PMU outposts in Iraq and Syria near Abukamal killing 25 members and wounding scores more of the Kata’ib Hezbollah brigades of the PMU.

We blamed Iran and the Kata’ib Hezbollah for the rocket attack near Kirkuk. That may be true, but the Kata’ib Hezbollah is not some rogue militia controlled out of Teheran. It is an integral part of the PMU, its 46th and 47th brigades and has been for years. The PMU is an integral part of the Iraqi military and has been for years. The PMU played a major role in defeating IS in both Iraq and Syria. Our attack on the Kata’ib Hezbollah outposts was an attack on the Iraqi military and government. We informed PM Abdul-Mahdi of our intended attacks. Abdul-Mahadi warned us not to do it, but, of course, we conducted the attacks despite his warning. We were proud of the attacks. The Pentagon even released footage of the attacks. It was supposed to be a clear message to Teheran.

Unfortunately for us, the message was also heard by Iraqis. After the funerals of many of the victims of our attacks on the PMU outposts, a large crowd of protestors headed for the US Embassy in the Green Zone. For weeks prior to this, Iraqi security forces kept protestors from entering the Green Zone and approaching the US Embassy. Not this time. The crowds, including mourners fresh from the funerals of their family members and many PMU soldiers, unarmed but in uniform, poured into the Green Zone right to the gates of the Embassy itself. A reception area was entered and burned. Iraqi security forces of the PrimeMinister’s Counter Terrorism Command were among the protestors. I surmise that PM Abdul-Mahdi was sending his own message back to the US.

Today, the PMU has told its troops to leave the vicinity of the Embassy as directed by the PM. Protests and rock throwings continue, but the Iraqi security forces are keeping a lid on the protestors more aggressive actions. The US sent an additional hundred Marines into the Embassy compound last night and appears to be also sending a battalion from the 82nd Airborne to the Embassy. (That shows just how oversized this Embassy is.)

For weeks, it was Iranian consulates and facilities that bore the brunt of Iraqi popular unrest. Iran reacted with restraint. With our lethal attacks on the Kata’ib Hezbollah, we changed that. Pompeo, Esper and Trump are keeping up the trash talking. Threatening Iran by killing Iraqis… whose ass was that brilliant diplomatic strategy pulled from?

I recommend an essay written by Haidar Sumeri on Sunday, before the protestors descended on the US Embassy, entitled “American Strikes in Iraq Have Just Made a Bad Situation Much Worse.” Sumeri is a long time commentator on regional issues, especially Iraqi security issues. His analysis is especially cogent given the events of the last two days. His writings may be worth following as this situation unfolds.

https://www.youtube.com/watch?v=PtRSIl2MAoQ  (Al Jazeera coverage of the protestors at the US Embassy with interesting commentary)

This entry was posted in Borg Wars, Iraq, TTG. Bookmark the permalink.

69 Responses to Our Embassy in Baghdad – TTG