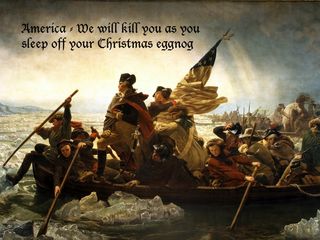 On this day in 1776, General Washington led his cold, ill fed and ill equipped army across the Delaware River to attack and decisively defeat the Hessian garrison at Trenton, New Jersey. It was a morning of bloody footprints in the snow and supreme audacity.

My son captioned the image above after we joked about the idea. Some may find this inappropriate black humor, but we like it. There are a number of inaccuracies. The Hessians were not sleeping off a night of holiday merriment. They were stone cold sober. Washington crossed the Delaware in the dead of the night, not in the light of dawn. That particular flag was not created until six months after the battle. Nevertheless, I like it. It stands for the Army that I remember and love. The Army of the FIDO attitude. (Look it up if you don't understand.) This is the Army that Churchill aptly described when he said, "We sleep safely at night because rough men stand ready to visit violence on those who would harm us." 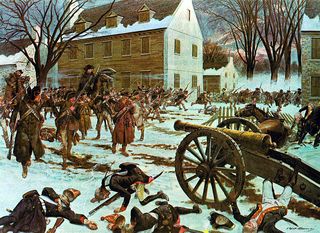 This entry was posted in Christmas, Humor, TTG. Bookmark the permalink.