Syria: A Major Turn of Events In the South 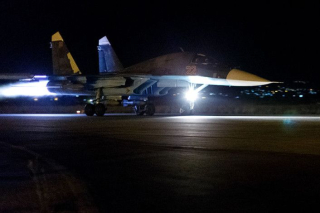 Whoever's making US policy in Syria, it's certainly not Nikki Haley. Despite her rabid statement of Friday, in which she declared that "Russia will ultimately bear responsibility for any further escalations in Syria," Russian war planes joined the battle for Daraa overnight, last night, after having been "conspicuously absent" as Reuters put it earlier on Saturday. At the same time, the US government informed the southern rebel groups via a letter seen by Reuters that it could expect no US military intervention on their behalf. This may have been the motivation for more units of the FSA to defect to the side of the Syrian army in order to fight against Hayat Tahrir al Sham, the latest incarnation of Al Qaeda in Syria. Were the Russian and US actions coordinated? Though the evidence is only circumstantial, it would appear that, despite Haley's threats, the Trump Administration is actually in support of the Syrian strategy to pressure any jihadi elements that don't change sides to surrender and evacuate, as was done in Douma in April. No one on either the U.S. or Russian sides has said anything to such effect, of course.  There hasn't even been any acknowledgement on the Russian side, as of yet, that Russian warplanes are carrying out air strikes in support of Syrian forces in Daraa.

The time line of events over the past 24 hours or so is generally as follows:

Al Masdar first broke the news that Russian aircraft had joined the campaign at 12:20 AM local time last night. A military source said that Russian aircraft had launched some 20 air strikes across northeastern Daraa starting at about 11 PM local time but that the majority of them hit the town of Busra Al-Harir, which practically divides the jihadi-held area in half. Within 40 minutes the number of air strikes was up to 30. About the same time, Reuters reported that while Syrian government forces had so far made heavy use of artillery and rockets in the current assault, Russian warplanes had not been deployed until now. "Throwing in Russia's full military weight in the campaign to regain southern Syria will weaken the ability of mainstream Free Syrian Army (FSA) rebel groups to withstand relentless bombing on civilian areas that forced their compatriots in other areas to submit to surrender deals," the news agency further noted.

The Russian Defense Ministry issued a statement at mid-day Moscow time today reporting that FSA formations in eleven settlements had joined with the Syrian army to fight against ISIS and Jabhat al Nusra. "By the end of June 23 these settlements were fully under control of the legitimate Syrian authorities," the Center said. The statement comes just a day after the Syrian army and the FSA jointly repelled an attack by over a thousand of al-Nusra Front terrorists in the Syrian southern de-escalation zone, Sputnik adds. At the same time, Reuters reported that the United States has told Syrian rebel factions they should not expect military support to help them resist a Russian-backed government offensive to regain opposition-held parts of Syria bordering Jordan and the Israeli-occupied Golan Heights. A copy of a message sent by Washington to heads of Free Syrian Army (FSA) groups, which was seen by Reuters, said the U.S. government wanted to make clear that "you should not base your decisions on the assumption or expectation of a military intervention by us." The U.S. message also told the rebels, according to Reuters, that it was left to them alone to take the right decision on how to face the Syrian army's military campaign based on what they saw was best for themselves and their people.

It's quite possible, it seems to me, that what we'll be seeing over the next several days, is the implementation of the same reconciliation strategy that we saw in Eastern Ghouta, Aleppo and other areas where some so-called rebel fighters will lay down their arms and settle their status with the government, others will be evacuated to Idlib and those that refuse, most likely ISIS, will be destroyed. Iran's Fars News Agency reported yesterday that some opposition ("terrorist") groups are demanding exactly that. Fars cites local sources reporting that the army's rapid advances in Dara'a province caused the terrorist groups to lay down their arms in the villages and towns of al-Lajah region (which according to the Al Masdar reports cited above was a major objective of the Syrian assault) and agree to the army's terms and conditions, calling for implementation of the reconciliation plan.

This entry was posted in Russia, Syria, Willy B. Bookmark the permalink.