The battle of Palmyra has officially started – TTG 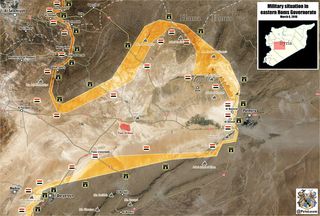 Earlier today, [7 Mar 2016] Major General Suheil al-Hassan, commander-in-chief of the Tiger Forces, was officially deployed to the Palmyra frontline after carrying out two succesful offensives against ISIS at Kuweiris Airbase and along the Ithriya-Khanasser supply route to Aleppo city. According to intel delivered to al-Masdar exclusively, General Suheil Al-Hassan brought with him the ‘shock troops’ of the Tiger Forces and the Suqur al-Sahara Brigade (Desert Falcons).

Both these units are specialized in offensive warfare and outflanking ambushes; thus, their redeployment hints at the Syrian Arab Army’s (SAA) intentions to recapture the strategic city of Palmyra. This desert city holds several historical monuments which are listed at UNESCO’s World Heritage; however, Palmyra (often referred to as Tadmur) was captured by ISIS in March of last year and has remained under the group’s control ever since. (Al Masdar News)

Liberating Palmyra, the beating heart of Syria, will be an important psychological victory for Assad and the Syrian people. It will also be an important step in lifting the siege of Deir ez Zor. This R+6 offensive demonstrates who has the initiative. IS will now have to concentrate their forces to address this new threat, thus relieving pressure on other fronts.

To the east of Deir ez Zor, YPG/SDF forces are consolidating their hold on the countryside around Shaddadi. They will undoubtedly soon resume their offensive towards Deir ez Zor. If these two offensives are able to meet at Deir ez Zor, IS will truly have their nuts in a vice.

86 Responses to The battle of Palmyra has officially started – TTG