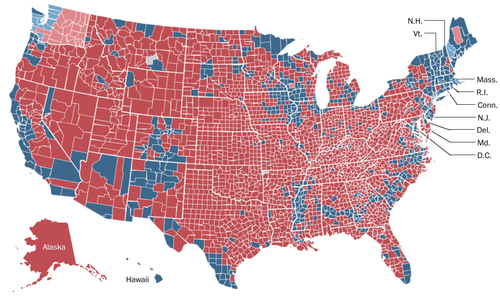 It seems to me that the Republican Party is destined to be the dominant political force outside the big cities and the northeast.  A map similar to the one above for the 2008 election is quite  similar in its distributions of the results by county.

The exceptions to the general position outside the big cities are easy to explain.  African-Americans,  American Indians, mining areas, Latinos along the Mexican border, retirees from the NE on the gold coast in Florida, these are the non big city populations that vote Democratic.

This would indicate to me that the chance of the GOP recovering control of the Executive Branch through a presidential victory is slim, and likely to remain that way ffor a long time.

The semi-rural base of the Republican Party does not wish to become the latest converts to "coastalism."  Their representatives in the world pf professional politics want just that.  They want to out-Democrat the Democrats.  This makes them continuously vulnerable to primary challenges.

Nevertheless, the United States remains a federal republic.  The GOP is very strong in many states.  Most governors are Republicans.  Most state legislatures are controlled by the GOP.  The US House of Repersentatives has been re-districted by both parties in such a way as to "freeze" power in place.

Perhaps the GOP should accept a future in which it controls most of the states and the House of Representatives.  Control of the US Senate may also be within reach from time to time.  pl