To War, To War, This Country’s Going to War” – TTG

Posted on February 9, 2018 by Andrei Martyanov 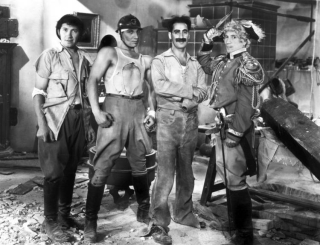 I’m afraid the recent “defensive attack” by US attack helicopters and artillery on Syrian tribesmen loyal to Damascus is not just a one-off fluke. It is a feature of the current US policy in Syria that will most likely result in another full blown war in the region… one that will put the US on a track to war with Russia.

First, here’s an account of the fighting southeast of Deir Ezzor on the eastern side of the Euphrates taken from the twitter feed of Maxim A. Suchkov, Russian editor for Al-Monitor. I’ve put it into prose form and corrected some spelling/grammar for easier reading.

“Russia’s Defense Ministry on US-coalition killing of 100+ pro-Assad forces: "The incident once again exposed true American intentions in Syria which is not the fight against terrorism but seizure &  control of economic assets." Russia’s MoD version of the incident:"On Feb.7, a Syrian pro-Assad militia was making an incursion to destroy a terrorist group which had been sporadically shelling pro-gov positions.The SYR militia was near El Isba, former oil refinery, 17 km south-east of Salkhiyakh. Suddenly, the Syrian pro-Assad militia came under mortar and multiple artillery rocket system fire, shortly followed by US helicopter strikes. 25 militiamen were wounded (no mention of how many killed). Russia's MoD suggests the US attack on pro-Assad militia were made possible because "the militia movements hadn’t been coordinated with the Russian military there." Following the attack Russia hosted reps of US coalition forces in Khmeymim airbase for talks during which according to Moscow, US told the oil refinery was under SDF and US control (which probably was meant to say "stay out" and what prompted Russian response on US trying to seize Syrian economic assets). Finally, Russian MoD claims attacks on Syrian pro-gov positions are getting more frequent over recent days from settlements of Mazlum, Al-Tabiya, and Ksh Sham. Moscow references its military radio intercepts saying it's done by one of ISIS "sleeper cells."  (@MSuchkov_ALM)

Maxim A. Suchov continues with the Russian reaction to the attack.

Follow-up on Moscow’s reaction to US strike on Syrian pro-gov forces:

1. Russia's UN Ambassador Nebenzya will raise the issue at the upcoming UN Security Council closed-door briefing on the humanitarian situation in Syria.
2. Moscow is now conducting a thorough investigation of the incident, Russia’s MFA asks "How could a decision to open a massive fire to defeat the Syrian militiamen be made in such a short period of time [between SDF attacks and time US aviation came to the field]?”
3. Russian Foreign Ministry spokesman Zakharova: "US military presence in Syria presents a serious challenge to the peace process and thwarts the protection of the country's territorial integrity."
4. Russia’s MFA spox Zakharova: "A 55-kilometer zone unilaterally created by US around mil base near al-Tanf used by scattered units of Daesh terrorists [who] have opportunity to hide from gov forces in area as well as regroup and prepare for new raids in the Syrian deserts"  (@MSuchkov_ALM)

An editorial in the pro-Turkish government paper “The Daily Sabah” lays the blame squarely on the shoulders of an out of control Pentagon and rogue CENTCOM generals. In so many words, they call on Trump to grow a pair and correct the situation. The full editorial is well worth reading.

“During his 2016 election campaign, U.S. President Donald Trump kept asking: "Why are we in Syria and Afghanistan?" He called for an end to entanglements abroad and a focus on domestic problems. President Barack Obama's Syria policy was based on little more than indifference and, the Trump administration just automatically adopted it.

After all these years, the U.S. still does not have a good grasp on what its policies on Syria are. What does it want to achieve? What is its endgame? What kind of timeframe has it settled on to achieve its objectives? American politicians seem clueless about what they have gotten themselves into.

No one knows who is in charge of the U.S.'s Syria policy. Chaos reigns. Who do we call to ask what the U.S. is doing in Syria?

It seems that with no lead from the top, United States Central Command (CENTCOM) has decided it is the boss. While operationally, it is good that soldiers are in charge, it seems soldiers have also taken over the decision making that should be under the purview of elected officials. CENTCOM and its officers now make statements, formulate strategies and even conduct diplomacy. Turkey has a history of power-hungry generals seeing themselves as guardians of the country and the U.S. is well-advised not to repeat it.”  (Daily Sabah)

Maxim Suchkov holds out a similar hope that Trump, himself, will step in and right the ship. He retweeted Trump and provided a comment to that tweet.

“I will be meeting with Henry Kissinger at 1:45pm. Will be discussing North Korea, China and the Middle East.” (@realDonaldTrump)

“Very interesting given Kissinger has now long been Putin’s go-to on messaging of Russia’s own position on same issues. Putin also holds Kissinger in high regard, seeking his wisdom, experience and balanced analysis of US-related matters."  (@MSuchkov_ALM)

I certainly hope Suchkov and the editors at The Daily Sabah are correct and that our current course in Syria is a temporary result of Trump’s inattention. The thought that a simple rage-filled outburst, accompanied by a few firings, can correct our course is oddly reassuring. However, I also have my doubts. Are the generals deflecting Trump by mentioning we control the Syrian oilfields when the President brings up the issue? Are the generals filling the President’s head with fears of Hezbollah and IRGC hordes running rampant across Syria?

Al-Monitor has an article out today extensively quoting Secretary of Defense Mattis. He downplays the role of Russia in Syria and Russian influence over Assad. He seems to be downplaying the risks that our aggressive talk and actions in Syria could lead to a confrontation with Russia. Well I think this jarhead is full of crap this time. To reinforce this man’s fullness of crap, a story appears this morning in Al Masdar News about attacks by the US controlled Deir Ezzor Military Council on SAA and NDF forces in Khashim and Tabiyyah on the Eastern shore of the Euphrates. Unlike the YPG/SDF, the Deir Ezzor Military Council is on the direct payroll of the State Department. This is a dangerous game we are playing.