Today I (Bruce Schneier) Briefed Congress on the NSA – TTG 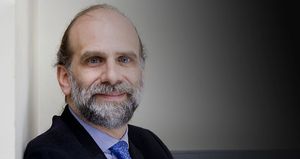 "This morning I spent an hour in a closed room with six Members of Congress: Rep. Lofgren, Rep. Sensenbrenner, Rep. Scott, Rep. Goodlate, Rep Thompson, and Rep. Amash. No staffers, no public: just them. Lofgren asked me to brief her and a few Representatives on the NSA. She said that the NSA wasn't forthcoming about their activities, and they wanted me — as someone with access to the Snowden documents — to explain to them what the NSA was doing. Of course I'm not going to give details on the meeting, except to say that it was candid and interesting. And that it's extremely freaky that Congress has such a difficult time getting information out of the NSA that they have to ask me. I really want oversight to work better in this country." (Schneier on Security)

I found this story of Bruce Schneier's visit to Congress more interesting than President Obama's speech on NSA reforms. Does anyone else find it astounding that Congressmen have to ask someone who's viewed the documents stolen from the NSA by Snowden in order to find out what the NSA is doing? Does this make the NSA look like an imperious rogue agency with nothng but contempt for Congress, the American people and the Constitution? I got to know a lot of competent, caring and patriotic people at the NSA. They do an important job and they do it well. Those who insist on protecting the unconstitutional collection and surveillance activities of the NSA are doing us all a disservice, especially those good people I knew at the NSA.

Obama proposed some modest reforms to our signals/digital collection and surveillance activities. That's better than nothing and certainly better than totally dismantling the NSA. There's a lot more work to be done. The NSA and their misguided supporters are going to be dragged kicking and screaming into meaningful reform only by those who support both the NSA and the Constitution and know the technology like Bruce Schneier.

This entry was posted in Intelligence, TTG. Bookmark the permalink.