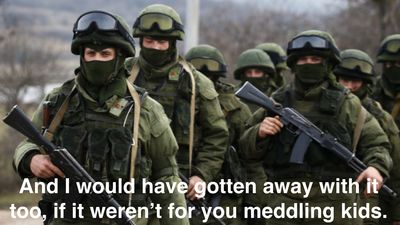 WASHINGTON — President Obama plans to substantially increase the deployment of heavy weapons, armored vehicles and other equipment to NATO countries in Central and Eastern Europe, a move that administration officials said was aimed at deterring Russia from further aggression in the region.

The White House plans to pay for the additional weapons and equipment with a budget request of more than $3.4 billion for military spending in Europe in 2017, several officials said Monday, more than quadrupling the current budget of $789 million. The weapons and equipment will be used by American and NATO forces, ensuring that the alliance can maintain a full armored combat brigade in the region at all times.

Though Russia’s military activity has quieted in eastern Ukraine in recent months, Moscow continues to maintain a presence there, working with pro-Russian local forces. Administration officials said the additional NATO forces were calculated to send a signal to President Vladimir V. Putin that the West remained deeply suspicious of his motives in the region.

“This is not a response to something that happened last Tuesday,” a senior administration official said. “This is a longer-term response to a changed security environment in Europe. This reflects a new situation, where Russia has become a more difficult actor.” (New York Times)

So the Pentagon wants to spend more than $3.4 billion in Europe in one year so they can menace the Russian Bear with a full armored combat brigade. Is this supposed to scare brother Vladimir into giving the Crimea back to Ukraine? Is brother Vladimir supposed to pull up stakes in Syria and leave Assad to the liver eaters? Apparently there are some in the Pentagon who believe that the total awesomeness of that armored brigade will accomplish just that.

"This is a really big deal, and the Russians are going to have a cow," Evelyn N. Farkas, the Pentagon's top policy official on Russia and Ukraine until October, told The Times on Tuesday. "It's a huge sign of commitment to deterring Russia, and to strengthening our alliance and our partnership with countries like Ukraine, Moldova and Georgia." (Business Insider)

This Farkas woman ought to be working with the HNC delegation that Colonel Lang just told us about. Farkas and the HNC are equally delusional.

I am firmly convinced Nuland, along with her cabal, and the rest of the Borgist horde are severely butthurt about losing the opportunity to fly the NATO flag over Sevastopol. That would have been the jewel in the crown. All they got out of their investment of five billion dollars was a failing country run by corrupt neo-Nazis and thieving oligarchs. To top it off, the revitalized Russian base at Sevastopol is now instrumental in crushing the Borgist dreams of the “Assad must go” crowd. How’s that for insult to injury.

A year ago we were talking about the pivot to Asia. Then we had to pivot back to the Middle East and another quick pivot to Europe and Russia. The Borg must be getting dizzy with all this pivoting.

This entry was posted in As The Borg Turns, Russia, Syria, TTG. Bookmark the permalink.