Confessions of a latent SJW – TTG 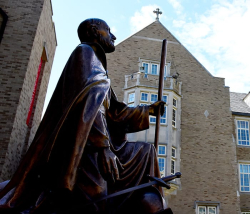 A while back we were discussing the merits of a liberal arts education and the sad state of our current education system. As part of that discussion, I looked at the current curriculum of my old prep school to see if it changed much from when I was there. To my surprise and joy, it changed very little. Students are still required to take four years of theology… good Jesuit theology. I was struck by the entry for the current theology department at Fairfield Prep and now present it below.

In light of the current discussion about the rise of the new bolsheviki in the Democratic Party, I thought I’d share my thoughts on the Ignatian approach to Roman Catholicism. I’m pretty sure many of you will consider the black robes to be quite red. I, on the other hand, find the teachings and example of Saint Ignatius of Loyola to be far more profound and worthy of emulation than anything Marx or Lenin ever dreamed of.

What is theology? Fundamentally, it’s about conversation.

The Greek word Theós (God) combined with logos (word, or reason) describes what happens in theology classes at Fairfield Prep. Talking about God, discovering God in the person of Jesus Christ, asking questions, having discussions and debates, and exploring the truths of other world religions are some of the many things that happen in theology. Through exegetical analysis of Scripture, learning the philosophies of the Saints (in particular, St. Ignatius of Loyola), contemplation, and reflection, theology students at Fairfield Prep are drawn to a more intimate experience of the Divine in their own lives.

In the classroom, students are exposed to the teachings of Christ regarding the Gospel imperative – the care of the poor. Theology students are inspired to work for equality and social justice in their local and global communities.

In the spirit of Christ, through Ignatian practices, students are encouraged to grow spiritually and religiously by orienting themselves towards others. Practically speaking, students are called to “Find God in All Things.” By recognizing the presence of the Divine within others and the universe we live in, students may be inspired to develop a deeper appreciation and love for Creation – in particular, care for our environment.

Morality, ethics, philosophy, history, science – they are all present within discussions of theology. Regardless of faith background (or lack thereof) all students are encouraged to express their beliefs and share their life experiences in their own ways. In theology, we are constantly working towards discovering Truth in our lives. Through science, history, literature, Scripture, and the Sacraments, we understand that God can be found in all things and in all ways here at Fairfield Prep. Join us as we continue the discussions, the questions, the reflections, and the actions that will make this world a more loving place for all.

Chair of the Theology Department

It’s still there, the call to find God in all things and to be a man for others. I graduated a few years before Father Pedro Arrupe presented his dissertation and made his presentation which became known as his “Men for Others” thesis. But his ideas already ran through the halls and faculty of Fairfield Prep by the end of the 60s. Community service was an integral part of the curriculum back then as were frequent retreats based on the Ignatian spiritual exercises. They still are. The Jesuits molded us into men for others, social justice warriors, but with a keen sense of self-examination (the examen). When we graduated in the rose garden of Bellarmine Hall under a beautiful June sun, we were charged with the familiar Jesuit call “ite inflammate omnia” (go forth and set the world on fire).

That phrase in itself is provocative. It goes back to Saint Ignatius of Loyola himself. It may go back much further, back to Saint Catherine of Siena. One of her most repeated quotes is “Be who God meant you to be and you will set the world on fire.” Setting the world on fire must have a different meaning back then. It sounds down right revolutionary these days.

In more recent times, Jesuits participated in the development of liberation theology, a blending of the Church’s professed preference for the poor and Marxism that is unsettling to many both in and outside the Church. This expression of strident social justice was never supported by the Vatican, especially when liberation theologists aligned themselves with armed Marxist revolutions. Even Pope Francis was not a fan although as Father Bergoglio he said,  "The option for the poor comes from the first centuries of Christianity. It's the Gospel itself. If you were to read one of the sermons of the first fathers of the Church, from the second or third centuries, about how you should treat the poor, you’d say it was Maoist or Trotskyist. The Church has always had the honor of this preferential option for the poor.” Pope Francis seeks reconciliation with rather than expulsion of the liberation theologists. This doesn’t surprise me considering the Jesuits' firmly held faith in the primacy of conscience, the belief that an informed conscience is the ultimate and final authority on what is morally permissible, and it is the obligation of the individual to follow their conscience even if it contradicts or acts against Church teaching. I believe that, but I also believe the liberation theologists could benefit from a more rigorous examen to reach a higher sense of discernment and a truly informed conscience.

I think the 1986 film “The Mission” captured some of these ideas and struggles very well with the interplay of Father Gabriel, Roderigo Mendoza and both the secular and religious authorities of that time. As  a product of a Jesuit and Special Forces education, this film resonated with me.

This entry was posted in Religion, TTG. Bookmark the permalink.

47 Responses to Confessions of a latent SJW – TTG