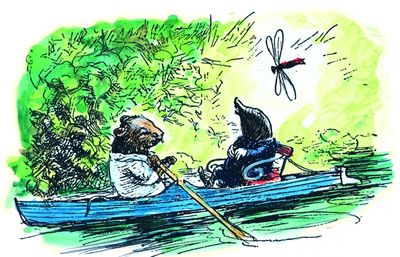 ”Believe me, my young friend, there is nothing — absolutely nothing — half so much worth doing as simply messing about in boats."

Ratty is definitely on to something. To be on the water in any kind of craft can be therapeutic. IMHO the sound of the surf can only be equalled by the sound of the wind in the pines. Both together… heaven. You can’t buy that kind of therapy with a million dollars. One of the saddest things I often saw on the streets of D.C. was the herds of young, ambitious suits with ear buds in their ears, eyes and thumbs glued to their smartphones, totally oblivious to their surroundings. Borg aspirants, no? It is no wonder so much self serving and destructive idiocy is produced in Washington. As I have said for the last four years, I think we deserve a break… or at least a little vicarious diversion from the madness that surrounds us.

Once again, I invite the SST Committee of Correspondence to follow the running of the Everglades Challenge which begins this Saturday morning. The event is organized by a colorful group of adventurers who call themselves the Water Tribe. The Everglades Challenge is an unsupported, expedition style adventure race for kayaks, canoes, and small sailboats. It starts at Fort DeSoto in Saint Petersburg, Florida and ends at Key Largo. The distance is roughly 300 nautical miles depending on one's course selection. Updates on the progress and tribulations of the participants will be posted on the Water Tribe forums. The boats are tracked by SPOT satellite. Their progress can be seen on this tracking map.

To truly get a feel for this event, I recommend you set aside an hour and a half to view this video about 2013 running of the Everglades Challenge. There’s some excellent banjo and fiddle work as well. For a sense of the history of the area, here’s an interesting article about Chokoloskee in the Oxford American.

This year 98 boats will be taking up the challenge. Some will not make it to Key Largo. Some may not even make it to Fort DeSoto. It’s been said that half the challenge is getting to the start. I believe it. The winners usually make the voyage in two days or so. The allowed time limit for successfully finishing the race is eight days. I would take the full eight days. Why rush to shorten such a grand experience?

I discovered this event several years ago. It’s still on my bucket list, along with building the boat. As I approach 63, I’m not worried about running out of time. One Water Triber named Jarhead (a former Marine officer) is doing the Florida Coastal Challenge of about 1,600 miles. He set sail a week ago from the Alabama border, making his way along the Florida panhandle in his 21 foot Sea Pearl. By Wednesday evening he was approaching Fort DeSoto. This is the latest Water Tribe forum update on his progress as of 1700 hours, 2 March:

Just heard from Jarhead. He said he is not going to come into Ft. DeSoto tonight. He is going to head inside Anclote Key, drink a beer and smoke a cigar. He sounded great and said, "I love sailing again."

This old coot is 71 years old. BTW, before anyone takes offense, I look forward to being referred to as an old coot.

Yes, I still plan on doing this some day. In addition to building the boat, I have to obtain a release from SWMBO to undertake such a crazy-assed and dangerous adventure. She has stood by me through thick and thin and, quite frankly, has had her fill of my risking life and limb. She would be happy to have us live out the remainder of our lives quietly, happily and contentedly as hobbits in the shire. This sounds wonderful… but the ring still calls out for me.