Posted on February 27, 2019 by Andrei Martyanov 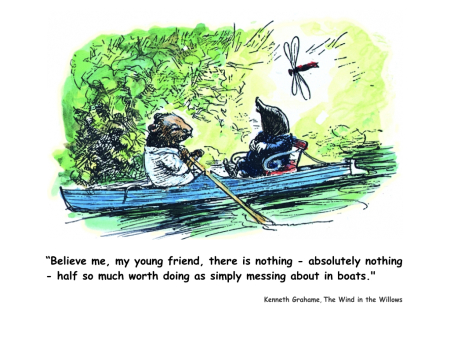 Ratty has always known the score. To be on the water in any kind of craft is therapeutic. The rythmic sound of the surf can only be equalled by the sound of the wind in the pines. Both together… heaven. You can’t buy that kind of therapy with a million dollars. One of the saddest things I often saw on the streets of DC was the herds of young, ambitious suits with ear buds in their ears, eyes and thumbs glued to their smartphones, totally oblivious to their surroundings. Nowadays they’re either fretting over Trump the devil incarnate or fawning over Trump the god emperor. As I have said for so many years now and Colonel Lang has recently reiterated most eloquently, I think we deserve a break… or at least a little vicarious diversion from the madness that surrounds us.

Funny how this continues to ring true, even after all the years. Once again, I invite the SST Committee of Correspondence to follow the running of the Everglades Challenge which begins this Saturday morning. The event is organized by a colorful group of adventurers who call themselves the Water Tribe.

Looking at the age of the usual participants, I’d be just as likely to be called sonny as old timer when I eventually get there. The Everglades Challenge is an unsupported, expedition style adventure race for kayaks, canoes, and small sailboats.

It starts at Fort DeSoto in Saint Petersburg, Florida and ends at Key Largo. The distance is roughly 300 nautical miles depending on one's course selection. Updates on the progress and tribulations of the participants will be posted on the WaterTribe Forums. There is also a WaterTribe Facebook page. It’s a closed group, but they let me in so they can’t be too picky. The boats are tracked by SPOT satellite. Their progress can be seen on this tracking map. There is also a tracking map provided through Race Owl. Between the two, the event should be well covered.

To truly get a feel for this event, I recommend you set aside an hour and a half to view this video about the 2013 running of the Everglades Challenge. There’s some excellent banjo and fiddle work as well. If your time challenged, have a gander at this short video of Accidental Sailor Girl filming some of the starting scenes of the 2017 Challenge.

This year 89 boats will be taking up the challenge. Some will not make it to Key Largo. Some may not even make it to Fort DeSoto. It’s been said that half the challenge is getting to the start. I believe it. The winners usually make the voyage in two days or so. The allowed time limit for successfully finishing the race is eight days. I would take the full eight days. Why rush to shorten such a grand experience? I’m not alone in this thinking. One WaterTribe member  commented, “Must remember he who spends the most days on course and still finishes in the allotted time wins. Trying not to race this year. Maybe I will race from camp site to camp site….”

Weather is unpredictable but appears to be fine so far for a Saturday morning start. The red tide counts are back to normal. Mosquito counts are said to be up in the Everglades. The gators and pythons are still battling for dominance. All the more reason to stick to the outside route. Just sharks and rogue waves to worry about out in the Gulf. Should be fun either way.

Last year I noticed the majority of craft in this challenge are either some form of expedition kayak or sailing catamaran/trimaran. This year is no different. These

multihulls obviously perform well just as those foiling catamarans that now win the America’s Cup, but these nautical wonders like the Hobie Mirage Tandem Island Kayaks don’t really inspire me… way too much plastic. And your ass is forever wet. As my Ranger buddy, a young PFC from the 2nd Ranger Battalion, told me, “You can stand this cold, wet misery forever, but once your bunghole is wet, that’s it. It all starts falling apart.” I remembered that bit of Ranger wisdom throughout my career and into my old age.

However, although I’m drawn to the more traditional and dryer designs of small open sailboats, I’ve become intrigued by the shunting proas of the South Pacific. They’re fast

and responsive to the wind. I remember the first time I saw a Hobie 16 catamaran with a rainbow hued sail back in 1977 in the Kahanamoku Lagoon. I marveled at the way it would instantaneously dart forward with the slightest gust. It looked like a water strider skittering across the Lagoon. That scene sticks with me to this day. Given that my messing about in boats most often takes place in the Potomac River, I need a craft that can take advantage of the usual light winds on the River. Perhaps the shunting proa is what I need to augment my Mistral windsurfer and Pungo kayak. Note: not a lot of wood in either of those.

To drink in the ancient beauty and simplicity of the proa, check out a couple of videos from the Fijian island of Fulaga. In the first, Meli demonstrates the diabolically simple

crab claw sail and rig and the process of shunting. The second video chronicles the building of a new proa in the old style with a variety of old and new tools. Watch a man cut large, beautifully even boards from a felled palm tree with a freehand chainsaw… barefoot. That’s some skill and some stones. I couldn’t do that. Every time I use my table saw, I approach it like it’s a vengeful and capricious god.

Since I can’t match the skills and techniques of the “watermen” of Faluga, I found a shunting proa design I could conceivably master. Instead of palm tree logs, I can use marine plywood. And I don’t have to be a chainsaw ninja. Oddly enough, this proa design is

the creation of a German who’s inspiration was the design of a Wisconsin born New Zealander. Here’s an English article on the P5 multichine proa. The plans are free which is perfect for futzing around, modifying and solving design challenges. I have a lot to learn about the sailing dynamics of both the traditional crab claw rig and the Gibbons rig, the brain child of Euell Gibbons of “Stalking the Wild Asparagus” fame. Both rigs do share some similarities to windsurfers so I have that going for me. This should keep me occupied for a while. I may never build one, but the process of thinking it through will, at least, help ward off dementia. Then again, it would be interesting to run the Everglades Challenge in a shunting proa. I’ve read of one adventurous gentleman who spent 14 months sailing the coast of Mexico in his proa. That’s a little too adventurous for me.

If you click on no other link in this posting, I implore you to check out this amusing and eclectic video featuring the P5 proa ”Lili'uokalani" in a wonderful little Bavarian-Hawaiian ditty called “Südwind.” You’ll see some exhilarating clips of a P5 flying across the Chiemsee. You’ll also see a loden cloth clad Bavarian playing an electric ukulele under an icicled rock overhang and a grass skirt clad Fräulein/wahine piloting a proa and singing in German. There. Now you have to check out this video.

I’ll end this the same way I ended it for the last two years. Some things will not change. In addition to deciding what boat to build, building that boat and getting to Fort DeSoto, I have to obtain a release from SWMBO to undertake such a crazy-assed and dangerous adventure. She has stood by me through thick and thin and, quite frankly, has had her fill of my risking life and limb. She would be happy to have us live out the remainder of our lives quietly, happily and contentedly as hobbits in the shire. This sounds wonderful… but the ring still calls out for me.