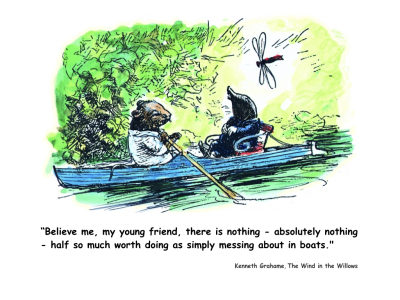 I debated with myself about doing an article this year about the Everglades Challenge. I’ve done them for nine or ten years straight and I was busy with the last bathroom remodel and routing cat5e cable for today’s FIOS install. I pretty much decided to forgo the article until I saw this morning’s comment from Rob Waddell. He’s doing it, by God! The least I could do is publish an article in support of our adventurous fellow correspondent.

So, for the ninth year or so, I invite the SST Committee of Correspondence to follow this year's running of the Everglades Challenge and, especially, follow Rob Waddell’s bold adventure. Let’s cheer him on.

I discovered this event more than a decade ago. It remains on my bucket list, along with building the boat. The event is organized by a colorful group of adventurers who call themselves the Water Tribe. The Everglades Challenge is an unsupported, expedition style adventure race for kayaks, canoes, and small sailboats. It starts at Fort DeSoto in Saint Petersburg, Florida and ends at Key Largo. The distance is roughly 300 nautical miles depending on one's course selection. There is a time limit of eight days. Updates on the progress and tribulations of the participants will be posted on the Water Tribe forums. The boats are tracked by SPOT satellite. Their progress can be seen on this tracking map. Rob’s WaterTribe name is SouthernCross

In years past about this time TTG posts about the Everglades Challenge, an adventure race from Tampa to Key Largo for all types of small vessels. TTG's enthusiasm for this marine adventure has led this kiwi old salt to sunny St. Peterburg where the 21' Dovekie dory, Southern Cross, has been fitted out to undertake this (now confirmed by fellow competitors) perilous voyage to Key Largo. It's not a one leg trip; three shore based checkpoints along the way require navigational and sailing skill, physical strength and lots of luck with wind and tide We are starting the Everglades Challenge 2020 adventure race this Saturday at 0730 Mullet Cove Pinellas Park St Petersburg FL. One more day sailing practice on our Dovkie 21 then we are off! Winds are 16 to 18 kn from the NE which means a fast but hairy ride. More reports may follow if we survive. RobW from Southern Cross This link will take you a tracking viewer.

Here’s Rob’s entry in the WaterTribe roster, “SouthernCross (aka Robert Waddell and SouthernCrossJohnnyMac (aka John MacDonald).” The description of the boat, “21 Dovekie 21 ft semi decked dory with single mainsail and jib 3x previous EC challenges completed with previous owner.” And their parting comment, “Heading north from the land of the Southern Cross 2020. All the way.. well behaved… Just in case it slips away. Rob W & Johnny Mac.” 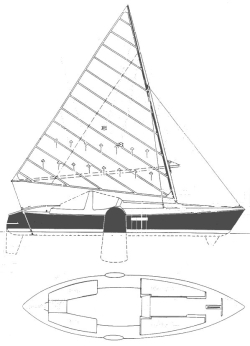 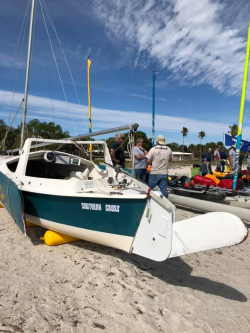 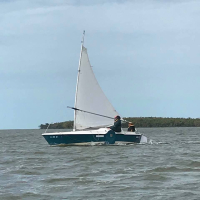 Heading into Chokoloskee with one reef

The winds are forecast to be generally from the northeast and brisk. That’s good for the Southern Cross. Of course, strong east winds means Florida Bay may be mostly mud. If  that’s the case, I hope Rob takes the Southern Cross the long way around the bay to enjoy broad reaches in deeper water. To see Rob and Johnny Mac off, I offer these words of wisdom from Lyle Lovett along with an illustration from John MacGregor's "A Thousand Miles in the Rob Roy Canoe on rivers and Lakes of Europe." 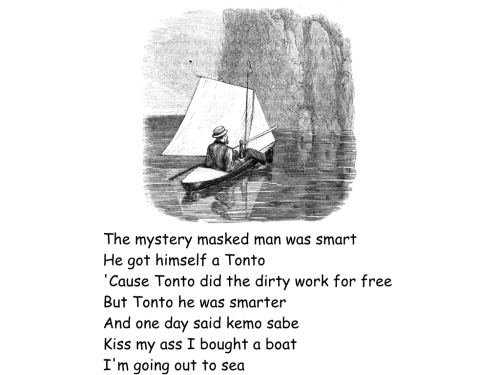 My younger son and I were in line for ZZQ barbecue a few weeks ago when this tune was playing. I couldn’t help but sing along and imagine I was ghosting along in my sailing kayak. Come to think of it, the Southern Cross is large enough for Rob and Johnny Mac to bring a pony with them. Fair winds and following seas, my friend.