Forget the ME, think Korea 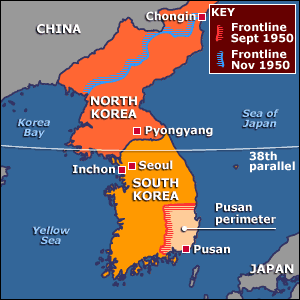 "Merry Christmas from Korea land of lice and diarrhea, from this land that we half mastered, Merry Christmas, you lucky bastards."  Korean War era Christmas card sent home to cheer everyone up.

North Korea invaded the south in June, 1950.  You all can argue whether or not Syngman Rhee provoked the attack.  I don't care.  There were no US forces in South Korea except for KMAG, the training group for the South Korean Army.  The NOKOs ran riot all over the place.  They had the nasty habit of torturing and killing PWs, unlike the nice Chinese who arrived later.

The UN resolved to resist.  US  troops were rushed from Japan where they had been enjoying the fruits of occupation duty.  To say that these US Army units had been allowed to wallow in the experience would be about right.  The NoKos kicked them around unmercifully.  A regiment of USMC showed up from somewhere (Okinawa maybe?)  They did a lot better initially until the Army brought some better units to the fight.  The 1st Cavalry Division comes to mind

That little pink patch was the Pusan Perimeter.  This was all the UN forces held by 14 September, 1950.  This was a dicey situation.  One more big push by the NoKos …

And then Macarthur landed the 1st Marine Division at Inchon, the newly built up forces at Pusan broke out of the perimeter and by November the front line was up in NoKoland where that blue line shows on the map.

Then the Chinese intervened and quick, quick the front line was back near the 38th Parallel.  There followed a lot of offensives and counter-offensives until Eisenhower negotiated an armistice in 1953.

In the course of all this, millions died and the economies of both countries were smashed to bits.

Kim Jung Un does not seem in the least interested in making nice with the US, Japan and the ROK.  He boasts of his intention to acquire a nuclear tipped ICBM that can range the US.  Maybe the NoKos don't have these yet, but it seems that they will have them soon.

IMO the US, under ANY administration will not accept having its cities held at risk in the bizarre spectacle of a NoKo counter-value strategy.

Would the US ultimately smash a lot of NoKo in a pre-emptive attack to reduce the threat? I think so.  Would the lack of a SoKo agreement on that stop the US?  I doubt that.

We would undoubtedly try a Stuxie type solution first, but if that does not work …

The NoKo reaction to  big, crippling, strikes is very likely to be a massive onslaught across the DMZ.  Could they capture large parts of Seoul?  Yes.

Would a back and forth reminiscent of 195-53 then occur?  Would millions die?  Probably.  Would most of the US Army and USMC end up in Korea?  Probably.

So, in that context you could forget the ME (sorry AIPAC).   The fight against the jihadis would become the problem of US Greenies, Kurds, tribal Arabs, the SAG, the Iraqi government and Iran.  the Israelis and Saudis would continue to back their jihadis of choice.

This entry was posted in Current Affairs, Korea. Bookmark the permalink.

169 Responses to Forget the ME, think Korea