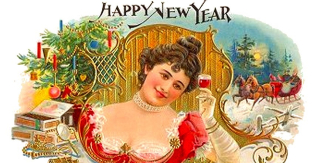 And now- an Old Army party.

And now the US Army has returned to wearing its traditional dark blue when not in the field.  Thank God!  The Grand March was always a feature of unit balls until "modernity" killed it off.

A New Year's Day reception in quarters given by commanders of battalions and regiments was a feature of regimental life until well into my time as a subaltern.  Attendance was not compulsory but expected.  My first assignment was to the Second Battalion, Second Infantry Regiment then stationed at Ft. Devens, Massachusetts, coincidentally the post at which I had been born.  One Year a few bachelor lieutenants preferred to go skiing and agreed that one of their number would attend the CO's reception and leave all their calling cards in the silver tray on a table near the front door to show they had been there.  Unfortunately the designated deliverer had a few two many eggnogs and dropped the cards in the tray with a rubber band still around them.  When asked to explain, they sensibly threw themselves on the mercy of the CO's wife, a lovely Puerto Rican lady who graciously forgave them all.  pl

This entry was posted in Ukraine Crisis. Bookmark the permalink.