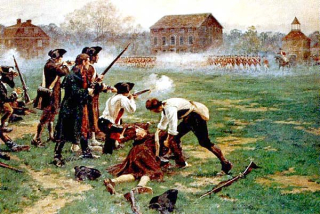 "Extravagant as the supposition is, let it however be made. Let a regular army, fully equal to the resources of the country, be formed; and let it be entirely at the devotion of the federal government; still it would not be going too far to say, that the State governments, with the people on their side, would be able to repel the danger. The highest number to which, according to the best computation, a standing army can be carried in any country, does not exceed one hundredth part of the whole number of souls; or one twenty-fifth part of the number able to bear arms. This proportion would not yield, in the United States, an army of more than twenty-five or thirty thousand men. To these would be opposed a militia amounting to near half a million of citizens with arms in their hands, officered by men chosen from among themselves, fighting for their common liberties, and united and conducted by governments possessing their affections and confidence. It may well be doubted, whether a militia thus circumstanced could ever be conquered by such a proportion of regular troops. Those who are best acquainted with the last successful resistance of this country against the British arms, will be most inclined to deny the possibility of it. Besides the advantage of being armed, which the Americans possess over the people of almost every other nation, the existence of subordinate governments, to which the people are attached, and by which the militia officers are appointed, forms a barrier against the enterprises of ambition, more insurmountable than any which a simple government of any form can admit of. Notwithstanding the military establishments in the several kingdoms of Europe, which are carried as far as the public resources will bear, the governments are afraid to trust the people with arms. And it is not certain, that with this aid alone they would not be able to shake off their yokes. But were the people to possess the additional advantages of local governments chosen by themselves, who could collect the national will and direct the national force, and of officers appointed out of the militia, by these governments, and attached both to them and to the militia, it may be affirmed with the greatest assurance, that the throne of every tyranny in Europe would be speedily overturned in spite of the legions which surround it."    Federalist 46

"Here the embattled farmers stood and fired the shots heard round the world."

I knew General Jack Galvin well.  A native Bostonian, he was, in retirement, the head of the Fletcher school of government.  He wrote a couple of books on the beginnings of the war of independence and the militia struggle in Massachusetts against parliamentary rule from London.  British government in its colonies was IMO quite legitimate and legal until the colonials decided that it was not.  They decided that for the reasons that the demon slavemaster Jefferson listed in the Declaration of Independence.

Jack (Plato) Galvin was a bricklayer's son.  His father had laid some of the finest bricks to be  found on Beacon Hill.  Jack was a bright boy who the US Army gratefully accepted for an officer's career.  We used to sit in the bar at the Four Seasons in Boston and discuss the various houses his father had worked in, over there, across the Commons.

Jack once  took me and my employer of the moment for a ride out to Concord and then back through Lexington to Boston.  On the way he told us of the systematic way the colonists had armed themselves with muzzle  loading rifles and small cannon bought in Spanish territory by this maritime people and shipped north to be hidden.

At the same time the colonials had increased the training time for the general run of militia.  These were basically the able bodied male population of the colony under arms.  From among them the most fit men of military age had organized themselves into "elite" companies with more uniform weapons.  These stood ready "at a moments notice."  And for that they were known as the "Minute Men."

The crisis came when His Majesty's Government decided to send troops into the countryside to seize the militia's cannon and ammunition.  Evidently their intelligence was pretty good for they knew where these were.  Everyone did not want to resist the king. An unlucky soul, Lieutenant Colonel Francis Smith was sent out on the long road to Concord with 700 British Regulars, battle hardened veterans of his majesty's many wars.  They were the "scum of the earth enlisted for drink," IOW, my kind of people.  But, as Lyautey remarked, "one does not win empires with virgins."

They met the local militia at Lexington Green halfway to Concord and blew their way through them after a few volleys had been exchanged.  They then moved on toward Concord, but the encounter had been disturbing.  These villagers and farmers had not run.  They had stood and fought.

At Concord the Regulars met an even larger force of militia.  These did not run either, at least for a while, and the losses among the Regulars were serious.  Smith decided that he was meeting resistance that not been expected and decided to withdraw to Boston back down the same road.

By then the militia and their Minute Company pals were fully mobilized.  They lined that road and fought the Regulars from ambush in every village, from every wood line and thicket.  The Regulars formed ranks to return fire many times but their numbers shrank and shrank.  This went on and on, a mile at a time.  LTC Smith sent a courier back to Boston on a fast horse and a relief column marched forth.  They met Smith's remnant somewhere on the road.  Without the relief column Smith's force would have been destroyed.

When the day was done the colonials still had their cannon and ammunition.

"Here the embattle farmers stood and fired the shots heard round the world."  pl

This entry was posted in government, History. Bookmark the permalink.