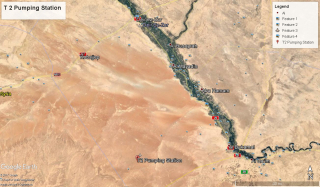 "The Syrian Arab Army (SAA) is gearing up to attack one of the most important border-crossings between the Deir Ezzor Governorate and Iraq’s Al-Anbar Governorate, a military source told Al-Masdar News today.

Led by their 5th Corps, the Syrian Arab Army plans to capture the imperative T-2 Pumping Station within the next few days, as their forces ramp up operations north of the Houran Valley.

Once the T-2 Pumping Station is seized, the Syrian Arab Army will have a clear path to the ‘Akaz Gas Fields, where they hope to expel the remaining Islamic State (ISIL) forces to the  key city of Albukamal.

With Albukamal in their sights, the Syrian Arab Army will attempt to cutoff the Islamic State’s most important supply route from Iraq, which will accelerate the terrorist group’s downfall near the provincial capital of Deir Ezzor.

Well, pilgrims, this would be a big deal.  A clean sweep to Albukamal will secure the border with Iraq and insure the creation of an overland route from Baghdad and Iran unless USAF starts attacking traffic along the road.  i do not expect that to happen but who knows what kind of guidance Kushner will pass on to DJT from Bibi.

The existing road bridge across the Euphrates River in the Albukamal area would be quite useful but I think the highway connection north to deir al-zor would provide a high speed approach for relief of the garrison.  pl