“McCain to hold up Dempsey for renewal… ” Foxnews 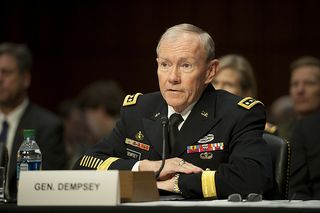 Why do the people of Arizona keep electing McCain?  His behavior grows increasingly bizarre.  He has descended into a search for self-importance expressed through an evident desire to see unending war as the future of America. Perhaps members of congress should be periodically examined for evidence of mental illness.

Senator McCain seems to think that he can run the foreign policy of the United States from his seat in the senate.   McCain does not seem to remember that he was defeated by Obama and therefore is not in charge of foreign policy nor does he command the armed forces.  Ah! I may be wrong.   Perhaps that is all he remembers.

In the War Between the States, the Republican radicals in congress attempted to seize control of the war effort and the armed forces.  They did this by creating something called the Joint committee on the Conduct of the War.  This group regularly "examined" the conduct and opinions of officers for the purpose of ensuring ideological purity and zeal for the fight.  One could easily imagine many of the collection of zealots now featured on MSNBC as member of that committee.  Senators McCain and Graham would have been a good "fit" for the committee along with others of Peter King variety.

Lincoln resisted this grab for his constitutional power.  He resisted it most effectively, but even so, a number of talented officers were ruined by the committee's influence.  Fitz John Porter and Charles Stone come to mind.  Porter was court-matialed at the urging of the committee and Stone imprisoned without trial.

Obama would do well to defend Dempsey and to stand by him.  If he does not, then he will see power slip away from him even more rapidly than it has thus far.  pl

28 Responses to “McCain to hold up Dempsey for renewal… ” Foxnews