Afghans trying to shake down the US government 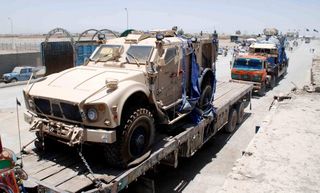 "Afghan officials allege that U.S. contractors hired to transport equipment failed to turn in documentation for billions of dollars in equipment shipped into the country since the 2010 troop “surge.” This month, Karzai’s cabinet came up with the $70 million fine, citing at least 70,000 cases in which the United States failed to process the necessary customs paperwork.
“How do we collect the fines for these violations?” Najibullah Wardak, the director general of the Afghan Customs Department, said in an interview Wednesday. “The only way is to stop all trucks from crossing the border. What else can we do?”"  Washpost

This is a standard "shake down" technique practised across the region from Morocco to Bangla Desh.  It is a common thing for governments to try to charge customs duty on everything foreign military forces or aid organizations bring into a country.

The fact that this is "coming to a head" in Afghanistan is an indication that the flow of cash money is drying up.

The US government should not pay a dime's worth of fines in this scam.  pl

12 Responses to Afghans trying to shake down the US government