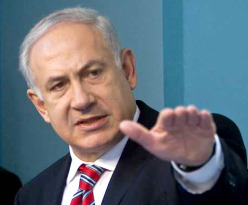 “The time has long since come for Jonathan to go free,” Netanyahu said at the outset of the meeting. “This issue will come up during President Obama’s visit. It has already been raised countless times by myself and others, and the time has come for him to go free,” he said. Esther Pollard echoed Netanyahu’s words, saying “Jonathan can’t anymore. This is a golden opportunity now that the president of the United States is coming. If not now, when?” Pollard’s wife was joined in her meeting with Netanyahu by Lawrence Korb, who was US deputy secretary of defense during the Reagan administration in 1985 when Pollard was arrested, and is currently a senior fellow at the liberal Center for American Progress think tank, which is considered close to the Obama administration. Also attending was Effie Lahav, who heads the Committee to Free Jonathan Pollard."  JPost

OK.  How about this deal?

1-  The US frees Pollard and in the announcement reiterates the simple fact that he is a traitor to the United States who spied for Israel.

2 -At the same time Israel publicly admits that it betrayed its friendship with the United States in the Pollard affair.

3- POTUS orders the Secretary of the Navy to convene a full scale investigation with regard to the attack on the USS Liberty by the IDF in 1967.  The previous naval investigation of the incident conducted by Admiral Kidd in 1967 was a farce and completely inadequate.  Jim Webb should be asked to conduct the investigation.  pl

This entry was posted in Israel. Bookmark the permalink.