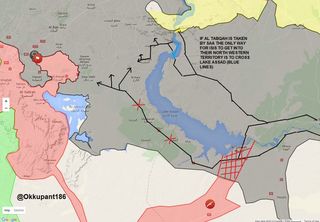 Yesterday Leith Fadel of Al Masdar News reported the SAA offensive to seize the Al Tabqah Airbase is proceeding nicely. Several correspondents of SST have already noted this and commented on its significance. The map above shows just how significant the seizure of Al Tabqah truly will be.

According to a military source in the Al-Salamiyah District, the Syrian Armed Forces established control over several small hilltops that surround the village of Zakiyah in southern Al-Raqqa after a fierce battle with the so-called “Islamic State of Iraq and Al-Sham” (ISIS) this morning.

Recently, ISIS lost control of the Zakiyah crossroad that would allow them access to much of the Hama Governorate’s eastern countryside; this loss now leaves the terrorist group without a primary supply route to their stronghold at the town of ‘Aqayrib. (Al Masdar News)

Supporting the SAA 555th mechanized brigade is the Desert Hawks Brigade, a battalion sized force of SAA veterans and volunteers armed with light and medium arms. I am only guessing, but I would imagine the Desert Hawks make heavy use of "technicals" since it was often used to intercept rebel and ISIS columns in the deserts of central and eastern Syria. It is reportedly trained by the Iranians. Along with the other units, this SAA force reminds me of the Africa Korps, a small force operating in the desert away from the main effort that has the potential of producing a military success far surpassing its small size.