Kamala the Terrible (and uncle joe) 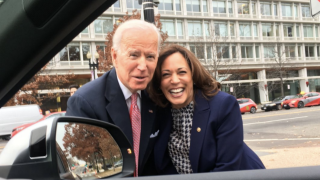 Sen. Kamala Harris (D-Calif.) said the Justice Department would have “no choice” but to charge President Donald Trump with obstruction of justice if he finished his term without being impeached.

Speaking with NPR’s Scott Detrow in an interview published Wednesday, Harris said special counsel Robert Mueller essentially set the stage for criminal charges against Trump with his investigation into the 2016 election. Longstanding Justice Department policy says that a sitting president cannot be indicted, and Harris said that was essentially the only reason Mueller did not charge Trump was the DoJ policy against indicting sitting presidents.

All that would change in 2021 if the Democratic presidential hopeful were in the White House and the Justice Department were under her watch, she said.

“I believe that they would have no choice, and that they should,” Harris said of the Justice Department’s charging Trump with obstruction. “I believe there should be accountability. Everyone should be held accountable. And the president is not above the law.”"  politico

So, the new rule will be – if you lose a federal election in the US your victorious opponents will prosecute you and seek to imprison you.  I know a lot of American political history and I really think this has never been done before.  But, now, the Harpies (Pelosi, Gilliland, K. Harris) have promised the left wing  foule that if they win they will seek to imprison Trump.  Uncle Joe is far ahead, and unless some instance of molestation comes to light or he nods off during an interview, he has a good chance of getting the nomination.

My SWAG is that he would choose a VP nominee whose persona and age would to some extent offset his doddering foolishness.

Kamala Harris looks to me to be the most likely; woman, photogenic, California, a jurist, radical enough to satisfy the mob.  If he did that then we would have a high chance of seeing a KH presidency.  God help us.  pl

20 Responses to Kamala the Terrible (and uncle joe)