The MB leaders have blinked. 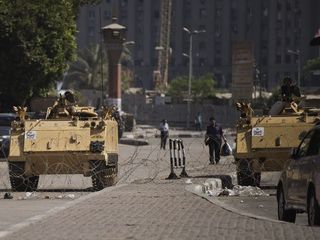 "Backers of ousted president Mohammed Morsi canceled at least one of the protest marches planned for Sunday, citing security concerns.
The Muslim Brotherhood-led coalition, furious over the ouster of former president Mohammed Morsi on July 3, called off a rally at Roxy Square in Cairo "after reports of thugs on rooftops of surrounding buildings," the Anti-Coup Movement said in a statement.
In a tweet, the group said "the march to the Constitutional Court has not been cancelled," despite conflicting media reports that it had.
The group had called for protests against Morsi's ouster by the military last month as well as the recent violence that has left more than 800 dead.
In his first appearance since a deadly crackdown Wednesday, Gen. Abdel-Fatah al-Sissi said Sunday that the military has no intention to seize power and called on Islamists to join the political process."  USAtoday

Well, there you have it.  as I expected, having been shown the "instruments of torment," the MB's leadership is backing away from the army's firepower on the streets of Cairo.  Actually they had not seen anything like the full firepower of the army in what has happened so far.

There is loose talk on American TV about American made tanks running over MB people on the streets and how terrible that is for anti-American feeling there.  In fact Egyptians generally detest Americans and always have.  Oh, your research associates may put on a brave show of bonhommie but they really don't like us.  They resent our wealth, our power and our arrogance.  Good for them.  We often deserve to be detested.

Nevertheless, I have not seen tanks in the streets of Cairo doing anything cruel this far.  Those machines in the picture are not tanks.  They are M-113 armored personnel carriers.  They are something like bulldozers with machine guns and an inch of aluminum armor.  An AK-47 bullet will go through the armor without any problem.   Look it up.

The government of Ehypt will outlaw the Muslim Brotherhood as a legal association.  This will deny it the right to be represented in court, deny it media exposure, deny it political existence.  You think that is irrelevant?  Wait and see.  pl

28 Responses to The MB leaders have blinked.