Last night (Monday the 11th) at the Newseum in Washington, DC, Rob Reiner screened his new film, Shock and Awe. Hard to believe that 15 years have passed since George W. Bush launched an unnecessary war in Iraq. During the prelude to that war, Knight Ridder was a lone voice in the media herd that refused to swallow the propaganda elixir brewed and served by the White House, the Pentagon and the CIA. Specifically, the movie is supposed to tell the story of Editor John Wolcott and his reporters, Warren Strobel and Jonathan Landay, who spent almost two years as pariahs in the journalism community because they reported that there were no facts to back up the claim that Iraq had WMDs. Rob Reiner's new movie (it will hit theaters next month), attempts to tell this story. Sadly, he fails.

I was tempted to title this review, SHOCKINGLY AWFUL. But that would be unfair. The movie is not dreadful. Just really disappointing. A more accurate title would be, BANAL and MEDIOCRE. Although the movie is stocked with a talented cast–Woody Harrelson, James Marsden, Tommy Lee Jones and Rob Reiner–and the actors do a fine job given the material they have to work with, the story is fragmented and superficial. The problem starts with the script. It lacks identity and focus.

The movie opens with a paraplegic black Army private wheeling himself into a Congressional hearing where he then testifies before a stereotypical congressional committee. It is a few years since Bush went to war in Iraq and the soldier, rather than read his testimony, decides to  ask the committee members a blunt question–why the hell did we go to war in Iraq. Cue the flashback.

It is now September 11, 2001 and we are introduced to reporters Jonathan Landay and Warren Strobel. The Al Qaeda attack on America lit the fuse on an 18 month time bomb that ultimately exploded in Iraq. We still do not know why George W Bush and his band of malevolent neocons decided that Saddam Hussein should be taken down. Maybe some really believed that Saddam and Bin Laden were in cahoots. Perhaps some knew that was just a pretext for getting rid of Saddam as a stepping stone to creating a path for democracy in the Levant. Reiner's movie does not answer this question.

Relying on the convention of following the chronology of the events, Reiner tries to give the viewer the insider story, letting you accompany the intrepid reporters trying to locate sources and confirm key facts. But the effort falls flat. For example, when it comes to question of whether Saddam Hussein was behind the 9-11 attacks we are treated to a brief film clip of Laurie Mylroie spouting her delusions that Saddam was Bin Laden's puppet master. If that name does not ring a bell do not assume that you are an ignoramus. Laurie had once had a romantic relationship with an Iraqi military attache assigned to Washington, DC. He dumped her (and you know the old saying about scorned women). From that moment on Laurie embarked on her own personal jihad against all things Iraqi. When 9-11 came along she was in the forefront of those pushing the line that Saddam did it.

The average person does not know this and certainly would not know she, her face and know her story. Only the cognoscente know who Laurie Mylroie was and the role she played in the propaganda campaign. I was sitting next to a well known guerrilla reporter and we both laughed out loud at Laurie's cameo on the screen. People around us cast puzzled glances our way wondering why we found hilarity in an anodyne scene.

This is the basic problem with the script. If you are not marinated in the lies and deception that preceded the invasion of Iraq, you will fail to appreciate the challenging environment confronting the boys at Knight Ridder. This film is not for the masses. It is too thin in substance to educate the average citizen and only skims the surface in explaining through the drama the risks and obstacles Knight Ridder confronted in trying to counter the propaganda tsunami of the Bush Administration.

There are some moments that allow the viewer to catch a scent of the story and hint of the frustration on occasion. One of the most frustrating scenes for me was an outdoor BBQ where Landay and Strobel were surrounded by family and lovers. Two of the old men at the gathering (one, I think, played the role of Strobel's dad), chided Warren and Jonathan on their reporting. Essentially accusing them of undermining the President and having bad information. That moment was powerful and poignant.

Rob Reiner also succumbed to genuflecting to Hollywood convention in the movie. We are forced to endure some relationship scenes as the Jonathan Landay and Warren Strobel characters dabble in marriage and a girl friend respectively. What a waste of film and screen time. The scenes with the wife and the girl friend did not add anything to the movie. While I am certain that Jonathan and Warren were eager to get laid during that period, their sexual escapades did nothing to certify that Bush and Cheney were lying about Iraq.

Rob Reiner, speaking after the screening of the movie last night, drew the parallel with today. In his mind today's press, unlike the sheep of 2001-2003 are supposedly awake and doing the job they should be doing by dogging Donald Trump. Fortunately, one of the audience members called Reiner out on this hypocrisy by reminding him that the Washington Post and New York Times, not to mention most of the electronic news media, were still being spoon-fed by the Obama Administration and were more than eager to play stenographer to push the Obama policy of the moment. Their decision to attack Donald Trump was not evidence that they turned over a new leaf and decided to become journalists again. They simply continued their role of cultivating and serving the interests of the establishment.

One truly rich ironic moment from last night. Former CIA Director John Brennan showed up. Imagine my joy when he sat down in front of me. Here's the picture: 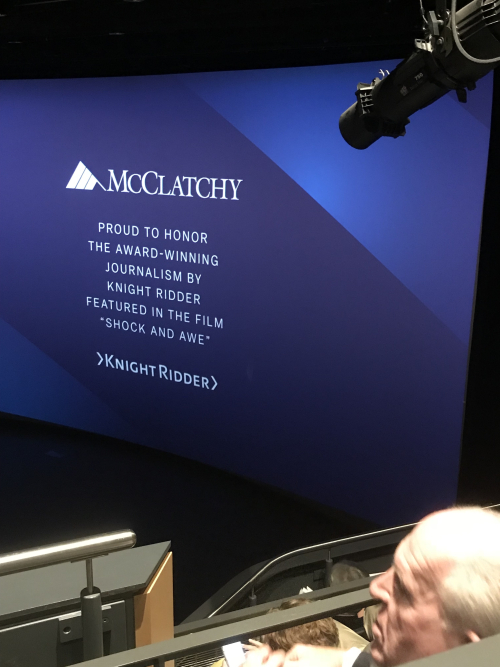 Why was he there? He was part of the group that helped gin up the case for invading Iraq. Was he there for a mea culpa? Nope. Turns out he had been a "technical" advisor to Rob Reiner. Reiner acknowledged to a friend of mine afterwards that he relied on insights about the CIA from Brennan and Jim Clapper.No wonder Reiner's movie sucked.

I do credit Reiner with reminding folks eager to forget that the so-called mainstream media played a critical role in selling the lie that Iraq had WMDs and needed to be stopped. FOX NEWS, not surprisingly, was a commonly mentioned foil and ridiculed by name throughout the film. While they deserve some of the opprobrium, others such as CNN and MSNBC got  a pass.

Whoops. Almost forgot. Reiner also made a point of frog gigging those Democrat Senators who voted to go to war in Iraq. The Senate Roll Call was replayed in part and featured the yes votes of Joe Biden, Hillary Clinton and John Kerry. At least Rob did not pull his punches on these members of the Deep State.

My major disappointment was the fact that Reiner and most of the audience at the Newseum premiere were oblivious to the fact that the present media have not become an aggressive watch dog like Knight Ridder during the run up to the 2003 Iraq War. Instead, they all have rolled over and are playing a partisan political game rather than pursue genuine truth. I was shocked at the smug sanctimonious attitude that infected the bulk of the audience. They convinced themselves that they would never allow another debacle like Iraq. Yet, many of these same self-declared paragons of morality had rejected the recent work of Sy Hersh because he dared to tell stories about Bin Laden and Syria that did not fit with the White House dogma. My conclusion from last night? We have not learned a goddamned thing from the last 15 years. PT

This entry was posted in As The Borg Turns, Borg Wars, Intelligence, Iraq, Movie Reviews. Bookmark the permalink.