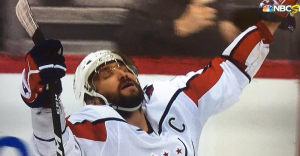 Yes! Absolute proof! And it all became crystal clear last night at PPG Paints Arena during game six overtime of the NHL round two Stanley Cup playoff series between the Pittsburgh Penguins and the Washington Capitals. At ground zero of this blatant case of collusion stand two nefarious Russkies, currently stationed in our Nations capital of all places… Evgeny Kuznetsov and Alexander Ovechkin. Cue the outrage! Cue the loud and continuous harumpfs (at least in Pittsburgh).

The longtime voice of Caps Radio, John Walton, caught this collusion in his usual over the top style. It’s fourteen minutes into overtime. Pittsburgh’s Crosby has the puck and id beginning a drive towards the Capitals net. “Poke-check away and now the counter, hear come the Caps,” Walton says as Crosby turned the puck over in the neutral zone to Alex Ovechkin who passes it forward to Kuznetzov. “Kuznetsov gets loose, Evgeny coming down the middle, a shot and it comes over — he scores! He scores! Evgeny Kuznetsov wins it for Washington. It’s off to the third round! The demons have been exorcised! Good morning, good afternoon, and good night, Pittsburgh! We’re going to Tampa Bay! The Capitals have done it!”

It’s even better when Walton’s Caps Radio call is synced to the NBCSN video courtesy of Cristiano Simonetta, the voice of Illini Hockey. Thanks Cristiano.

Sports in DC is a seemingly unending series of desperation and frustration. As undoubtedly happens in every sports town, Coach Barry Trotz and every member of the Caps team have been raked over the coals by fans in their seasonal disappointment and frustration. But the stars have aligned. The Caps rookies and veterans are clicking with a burning hunger not seen in a long time. This hunger is somehow aligning with the exasperatingly pig headed admonishment of Trotz, "Stick to the plan." It's working. We’re halfway there. The Caps now face the formidable Tampa Bay Lightning and another formidable team from the Western Conference. The day before this game, Barry Trotz implored all DC sports fans, “Just get behind us, please. That’s all I ask.”

Note: No, this is not the big story of the day. Not even close. But damn, people. there are a lot of things in this world, big and small, that we should take in. Keep your heads up.

This entry was posted in Humor, TTG, Whatever. Bookmark the permalink.