Some thoughts on Idlib Dawn – TTG 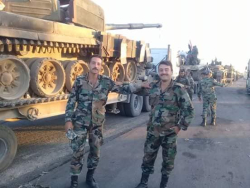 The seesaw events of the last few days can be examined from the political dancing and posturing of the major players and from the combatants’ maneuvers on the battlefield. Obviously there is a lot of interplay between the two, but I think it is the soldiers who are driving this train rather than the politicians. I'm also way more comfortable at the grazing fire level than wallowing among the political class.

The SAA still is composed of a few well trained, well led and well equipped combined arms units capable of sustained heavy combat. They are constantly moved to where they are needed most. Most of the SAA positions are manned by lightly armed National Defense Forces (NDF) and local militias. These forces essentially man a picket line against the jihadis. They can defend against light probes, but cannot withstand a major jihadi assault especially when those jihadis are supported by Turkish artillery and armor. That is what happened at Saraqib when the 25th Division and Liwa al Quds were withdrawn to attack the al Zawhiya Mountains and the M4 from the south. It happened again when the 25th and Liwa Al Quds pulled out of that offensive to deal with Saraqib for the second time. Fortunately, the NDF and militias were able to withdraw rather than being overrun and destroyed.

In the face of the SAA success in Operation Idlib Dawn, Erdogan slowly ratcheted up the use of the Turkish Army to bolster his jihadi allies on the battlefield. The SAA adjusted. However, bombing of the convoy resulting in the death of thirty plus Turkish soldiers drove Erdogan to find a way to assuage his embarrassment. I think his retaliation with MLRS, artillery and drone strikes surprised the SAA and the Russians as well. Perhaps the Russians first thought the Turkish strikes were a face saving measure and would stop after the initial strikes. Erdogan thought this Russian pause was a sign of weakness and did not stop his attacks. Another blunder. The R+6 adjusted once again. SAA air defenses were moved to the battlefield. Russian air strikes increased. It appears Russian EW units are now in action against Turkish drones. The SAA is still not directly targeting the Turks, but if the Turks are hanging abound the jihadis, the SAA does not hesitate to strike. With all the Turkish equipment and uniforms supplied to the jihadis, it getting difficult to tell them apart. Russia has told Turkey they could not guarantee the safety of Turkish aircraft over Syria. I believe the Iranians have also warned Turkey that all those surrounded Turkish observation posts were under direct observation and could easily be under direct fire. Erdogan’s bluff has been called.

The jihadis are suffering from a lack of sufficient assault troops in spite of Turkish largesse. After retaking Saraqib with several days of relentless assaults and heavy casualties, they pulled many of their fighters off the battlefield to address the threat to the M4 to their west. They could not hold Saraqib and attack south of the M4 at the same time. Their chance to retake Saraqib is now gone. The Russians have moved their MPs into Saraqib as a signal to Erdogan that it is forever part of Syria.

The jihadi counteroffensive in southern Idlib was blunted in a unique way. The SAA in Kafr Nabl let the word that they have withdrawn from Kafr Nabl be spread on social media. In reality, the SAA remained in hidden positions in the town hoping to lure the jihadis into an ambush. It worked. The jihadis advanced and were annihilated. The SAA immediately counterattacked and retook two additional towns. I don’t know what SAA unit this was. It could very well have been an NDF outfit. They are learning. The jihadis are whining about Spetsnaz operating in the area. Maybe they are, maybe they’re not. I actually hope there are Russian advisors working with those second tier NDF units, advising and calling in air strikes. This ambush is something I would have advised them to do. I love the ambush.

The Russians are rapidly replacing the SAA’s battlefield losses in equipment and are not withholding air support to the SAA. Neither Moscow nor Damascus are impressed by Erdogan’s latest histrionics. Trump and the DoD has said no dice to Erdogan’s request for help. It does appear that Pompeo is still trying to drum up some kind of support for “our staunch NATO ally.”

I predict the R+6 will secure both the M4 and M5 in the coming weeks, but will leave Idlib city for another day. They have to let the Turkish frog boil a little longer before he will accept the fact that Idlib is a Syrian city without throwing another hissy fit. He’ll also have to figure out what he’s going to do with all those jihadi friends of his. Libya isn’t going his way, either.

This entry was posted in Russia, Syria, The Military Art, TTG, Turkey. Bookmark the permalink.

25 Responses to Some thoughts on Idlib Dawn – TTG