Someone is Lying About Covid by Larry C Johnson 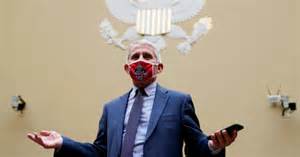 Contrary to claims by the media and the ego maniac Dr. Fauci about a tidal wave of Covid infections, I have first hand, albeit anecdotal evidence, that there is a lot of bullshit surrounding reports of people who have “tested” positive for Covid. My old friend Janet, who was the GM of a very popular hair salon, heard yesterday from two of her former employees that they had “tested positive” for Covid. At first she was very alarmed and concerned for their welfare until she heard the rest of the story (Paul Harvey’s signature line). Both reported neither had been to any testing facility nor had they provided any sample of any body fluid. But both were notified in the mail that they had “tested positive.”

Then there is my friend Rob. I learned from him this week that four of his buddies in the Miami area had gone to a testing facility and had filled out paperwork in preparation for being tested for Covid. But faced with a long line and interminable wait they drove off and did not have any samples collected. But guess what? All four were informed that they too were “positive” for Covid.

While this is anecdotal, these accounts are real and are not just isolated mistakes. Somebody in the testing chain is playing a dangerous, dishonest game. Informing perfectly healthy people that they have a positive result for a disease they have never been tested for is nothing more than Mega Bullshit.

I only know one person in my social network that has had Covid. He was never hospitalized and only felt tired and decided against spending the day skiing at Vail. I am not denying that Covid is real and that some people are infected by it, some are hospitalized and some die. But it is a very small percentage.

Here is the latest run down of what is going on at Sarasota Memorial Hospital. These are their figures, not mine:

COVID+ patients in ICU today: 25 (no change from yesterday)

* SMH increased its ICU capacity from 62 to 72 beds in June and has enough ventilators to create more than 100 ICU beds, if needed, to manage a surge.

Patients successfully treated/discharged: 580 (573 yesterday) {inpatients and patients treated in the ER but not hospitalized}

*** Reflects cumulative number of patients treated at SMH since outbreak began in March.

While the media is busy telling you about Florida being a veritable hotbed of plague, the fact is that since March 1st, there have been a total of 57 deaths from Covid in Sarasota Memorial Hospital. I am sure that those who lost loved ones are generally sad about that, but in Florida where I live, we have lots of elderly souls who are dying every day. Let us put this in perspective–one person is dying from Covid at Sarasota Memorial Hospital every three days. The death rates from cancer and heart disease are probably higher.

And then we have Dr. “NO OPINION” Fauci. Except, he seems to have an opinion on a wide variety of topics that pander to Democrat propaganda memes. There is no logic nor consistency to Fauci’s pronouncements.

Early on Fauci proclaimed that Covid:

What about masks? He told 60 Minutes in March:

“No, right now, people should not be wearing — there’s no reason to be walking around with a mask, . . . “When you’re in the middle of an outbreak, wearing a mask might make people feel a little bit better, and it might even block a droplet. But it’s not providing the perfect protection that people think that it is,” Fauci 3.0 continued. “And often there are unintended consequences; people keep fiddling with the mask, and they keep touching their face.”

All true. It was true then and is true now. But not in Fauci world.  Executing an intellectual backward somersault reminiscent of gymnast Nadia Komenich’s flips in her prime, Fauci reversed himself, sort of:

But, he added, once it became clear people can spread the virus without knowing they’re sick, public health leaders realized the message needed to change.

“We have people who may not even know they’re infected and are inadvertently infecting others,” said Fauci.

So, does that mean that protestors at a Black Lives Matter riot or an Antifa fire bombing party must wear masks? Oh hell no. Even though Fauci now claims masks are essential to public health he insists he has no opinion on requiring masks for masses of disgruntled souls keen on torching their cities. Really?

What about strangers having sex? Masks required. Nope says Dr. Fauci, now convinced that he is the 21st Century version of Dr. Ruth, only taller.

What about people gathering in churches to worship in groups larger than 50? Verbotten says Herr Fauci unless you are Democrats attending one of the multiple funerals for deceased civil rights icon John Lewis, then it is okay to have a large gathering and forget about social distancing.

What Fauci and his media enablers are forgetting is that most Americans, even though a majority no longer work on farms, smell this bullshit ten miles away. It is rancid and putrid.

Thanks to Congressman Jim Jordan for calling out Fauci on his selective opining about what is and is not required for good public health:

It is now clear that Fauci’s dismal performance in trying to throw out the first pitch at the opener for the Washington Nats is a great metaphor for his competence as a Physician. Word to Fauci–Shut Up!

This entry was posted in Current Affairs, Larry Johnson. Bookmark the permalink.