Posted on February 14, 2020 by Andrei Martyanov 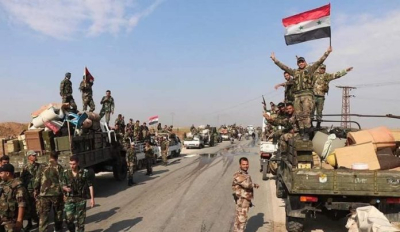 BEIRUT, LEBANON (12:10 P.M.) – The Syrian Arab Army (SAA) is officially in full control of the Aleppo-Damascus Highway (M-5) after eight years of battle. The Syrian Army said they captured the last points along the highway on Tuesday evening, when their forces took control of the strategic town of Khan Al-‘Assal and the nearby Rashiddeen 4 sector in southwestern Aleppo.

According to the Syrian Army, their forces were able to achieve this imperative victory after capturing several important sites in eastern Idlib, including the cities of Saraqib and Ma’arat Al-Nu’man. While the Aleppo-Damascus Highway is under their control, the roadway will not likely be reopened to the public until the Syrian Army pushes west towards the Turkish border.

The reason for this is due to the fact that the jihadist rebels of Hay’at Tahrir Al-Sham (HTS) and their allies from the Turkish-backed National Liberation Front (NLF) still maintain a presence along the western part of the Aleppo-Damascus Highway. Furthermore, there are still grave concerns of a potential large-scale Turkish military offensive to reclaim the areas lost by the jihadist rebels over the last few weeks.  (AMN)

A lot went on in the last week to get to this point. I and other observers saw this clearing of the M5 as the objective of this phase of operation Idlib Dawn. The SAA is still on the offensive and may be aiming for more. One thing is for certain. The jihadis are having their asses handed to them.

Let’s look at the SAA’s progress in maps. I wish I could make one of those animated battlefield maps like the American Battlefield Trust created for many of our Civil War battles, but that’s beyond my reach.  You’ll have to settle for this series of borrowed maps along with my comments. Most of the recent action took place well north of Saraqib and Idlib.  The 25th Special operations Division continued to move north along the M5 forcing the jihadis east of that highway to retreat to avoid encirclement. The 25th linked up with the Republican Guard near Al Barfoum and Zerbeh along the M5 on 8 February. At that point, the 25th did the unexpected. They struck northwest from ICARDA agricultural research station towards Kafr Aleppo. 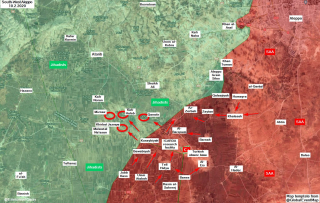 The axis of this advance took the high ground in the middle of the Idlib plain. It appeared the 25th was heading towards Kafr Nouran, Al Atarib and the Bab al Hawa Highway, Turkey’s main supply route to Idlib. 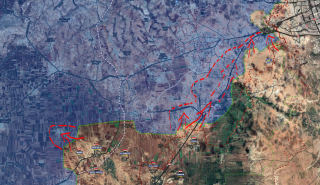 However, the 25th surprised everyone and pivoted northward Arnaz and the Highway 60 cutting that road on 12 February. Perhaps we shouldn’t have been too surprised. Just prior to this pivot, the Russian and Syrian Aerospace Forces conducted heavy strikes against jihadist forces in the path of the 25th. 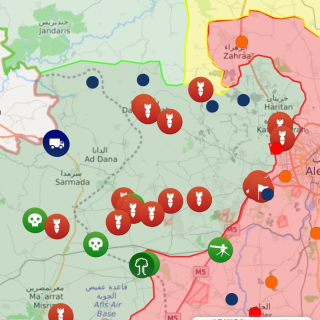 Meanwhile, Erdogan continued pouring in additional troops and equipment and threatening massive retaliation against the SAA. They established several new “observation posts” at Al Atarib and other points along the Bab al Hawa Highway leading to Idlib. The Turks and the SAA traded artillery strikes and more Turkish casualties were shipped back north of the border. Finally, on 10 February the jihadis began launching several counterattacks armed with Turkish equipment and supported by Turkish artillery.

The counterattack towards Saraqib began with a jihadi VBIED which was stopped by SAA fire before it could reach its target. The counterattack did not get far. Reports indicate the SAA was alerted to the impending attack by Russian reconnaissance aircraft. The SAA targeted the jihadis with BM-27 Uragan and BM-30 Smerch rocket launchers. Of the 80 attacking jihadists, 60 were killed and the rest wounded. Eight vehicles including Turkish supplied armored vehicles were destroyed. Infantry is the queen of battle. Artillery is the king of battle. And the king always puts it where the queen wants it. 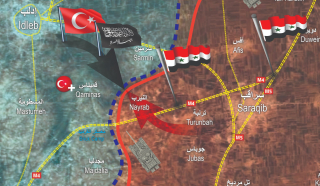 The jihadists launched two other counterattacks towards  25th Division positions at Kafr Aleppo and Arnaz on 12 February. Both attacks were turned back in a matter of hours. The 25th immediately went on the offensive and captured two more towns. It seems the SAA has learned to consolidate on the objective… and then some. The jihadists failed to initiate another counterattack after these defeats until today. They tried again on the Kafr Halab/Kafr Aleppo front with the same results – over 100 dead jihadis and dozens of vehicles including at least four Turkish supplied APCs turned into smoking hulks. All this was done in an effort to secure the Bab al Hawa-Idlib road, an LOC critical to Erdogan’s and the jihadists’ desire to retain Idlib. 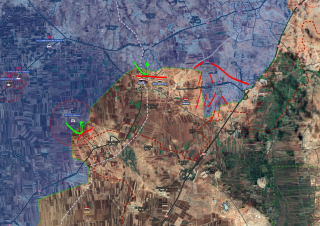 The 25th did not stop there. They took the Regiment 46 installation today on the way to Atarib on the Bab al Hawa Highway. A Turkish unit was surrounded at Regiment 46

Things have also gone well on the Aleppo front. The 4th Armored Division steadily marched westward pushing the jihadis out of Aleppo’s suburbs in spite of the jihadis' extensive tunnels and well prepared fortifications. 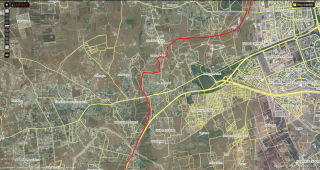 It now appears another front has opened from the YPG and SAA held territory northwest of Aleppo pushing south into jihadi held territory. This is certainly not tank country, but it is also not fortified built up areas of the west Aleppo suburbs. If this push south is successful and the 25th captures Atarib and continues north, the jihadis will be encircled or forced to retreat. They will be far removed from Aleppo and pushed towards the Turkish border of Hatay. The map below shows a possible scenario, not actual progress. 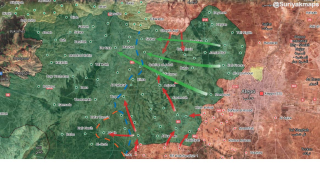 Erdogan’s Ottoman dreams for Idlib will have to be rethought. My guess is that Erdogan regrets sending those 3,000 plus jihadi fighters to Libya. They were probably some of his better fighters. Well, life’s a bitch Tayyip.

This entry was posted in Syria, The Military Art, TTG, Turkey. Bookmark the permalink.