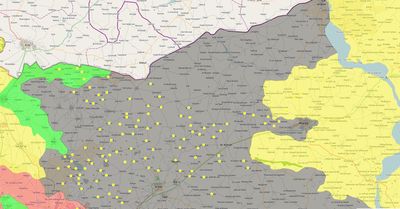 I have the feeling deep down in my bones that the Kurds of Rojava are using the current YPG/SDF offensive to take Manbij as a means of reuniting with their brothers and sisters in Afrin. They sense the possible. CENTCOM spokesmen have assured us, and Turkey, that the Arabs are in the lead in this offensive to take Manbij, that only 500 Kurds are taking part in the fighting and that they will leave once the objectives are accomplished. I seriously doubt all of this.

The map above was made two days ago. As of this morning the YPG/SDF forces may have completed the encirclement of Manbij or they may have left an escape route to the northwest open. They definitely have continued further west to Al’Arimah. They are halfway to Al-Bab. All those yellow dots on the map are Kurdish villages and towns just begging to be connected. Now that the chase is on, I don’t see how those YPG fighters can resist the temptation to fulfill their Rojavan dream… or at least try.

U.S. Special Forces and French special operations forces are advising/assisting the ground forces around Manbij. Our air support can come from our carrier off the coast as well as from our airbase in Turkey. I don’t see any signs of this support being withdrawn before the Kurds can realize their objectives. What will we tell Erdogan if that happens? Tango sierra?

This map is the work of a good cartographer. It conveys accurate information and tells the story that the cartographer intends to tell. It is the work of Ariyan Mahmoud (@AriyanMahmoud). His twitter description states, “I am mainly interested in history. I create maps too.” With this map, I think he intended to say that Rojava will be one.

I took several courses in cartography many years ago. I still have my Rapidograph pens, though I doubt cartographers use those much anymore. Below is another map by another cartographer who describes himself as a historian, conflict analyst and map maker. Emmanuel Pene is an editor of “The Maghreb and Orient Courier” and founder of the website agathocledesyracuse.com, a treasure trove of maps. This particular map, also done two days ago, depicts the disposition of YPG/SDF forces around Manbij. Here we can see smaller units arrayed along the road networks with a lot of space between these units and a vast amount of empty space behind them. This is probably an accurate depiction of how troops are deployed throughout Syria. Colonel Lang is right. There aren’t enough troops. 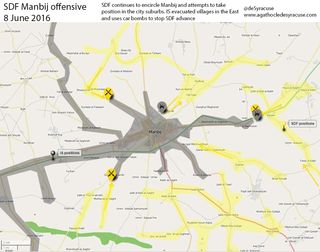 This entry was posted in Middle East, Syria, TTG. Bookmark the permalink.