The Deep State propaganda machine is spinning at hyperdrive. You are being repeatedly told that unmasking is common. Nothin unusual here. Move along. Reminds me of the scene from the Naked Gun when faux detective Frank Drebin tried to tell people they were not seeing what they were seeing:

Leave it to lying Jimmy Clapper to pop up as one of the prevaricators eager to feed a false meme to a gullible public. He is caught up in the unmasking with his metaphorical pants down around his ankles and his hideous junk exposed–simply put, Clapper spied on Michael Flynn. Here is Clapper's pathetic attempt to put lipstick on this crooked pig:

Former Director of National Intelligence (DNI) James Clapper said Thursday it is “routine” to “unmask” American citizens who have been caught up in surveillance of foreign individuals as Republicans spark an uproar over allegations that officials spied on former national security adviser Michael Flynn.

Clapper and other apologists are counting on your ignorance of intelligence community processes and procedures for collecting intelligence. What I find shocking is that there are thousands of intelligence professionals who understand that Clapper is spewing total bullshit but, because of their hatred of Donald Trump, stay silent and allow Clapper's lies to go unchallenged.

Let us start with the basics. The document that Acting DNI Grenell declassified last week regarding the "unmasking" of Michael Flynn gives us only the names and dates that requests were made to the NSA. But those requests came in response to a NSA intelligence report or document that the requestors had read. That means finished intelligence.

The following is an example of the formatting and content of the type of NSA messages that the Obama people were reading when they encountered an "unnamed" American citizen and just had to know who it was.

The type of message that had Michael Flynn's name carried the following classification headers (if you click on the link it will take you to a very interesting NSA document that addresses the whole issue of spying on Americans):

Next you get the Message report number, in this case it is SERIAL 3/00/532318-12, and the the sender and addressee information. In the image immediately below, DIRNSA refers to the Director of NSA, "COS KINGSTON" is the CIA Chief in Kingston, Jamaica.  Note that other agencies such as DEA, DIA, FAA and even INTERIOR are sent copies of this message. 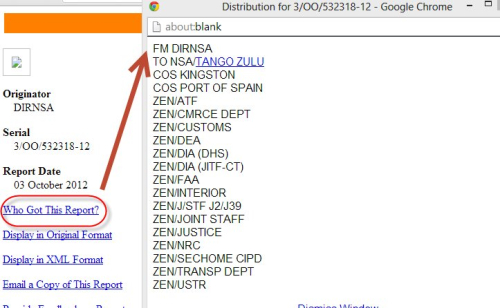 Next comes the content. It is vital that you understand that this type of report is not just the raw take–i.e., an unedited transcript of the conversation with no commentary. The reports that inspired the readers to ask for the name of the unnamed American were produced in response to specific collection requirements. If you have never worked in the intelligence field, you probably have the false notion that intelligence collectors wake up each morning, scan news headlines for the sexiest, most provocative stories and then decide that is the information they will collect for that day. Nope. Does not work that way at all. It is a very bureaucratic process.

NSA, unlike CIA, scoops up all electronic communications, such emails, phone calls, text messages. The volume of "take" is so gargantuan that most of the information is never processed or analyzed. The initial scrubbing comes via computer systems and algorithms designed to weed out wheat from chaff. But at some point that intelligence gets into the hands of an analyst. The decision about what to publish and analyze normally
is based on collection plans. A collection plan is a list of priority issues or persons that the Director of National Intelligence, acting on behalf of the President, uses to tell the specific intelligence agencies–NSA and CIA in particular–what they need to collect.

Let me give you a specific example from own experience. In the aftermath of the bombing of the Israeli Embassy in Buenos Aires in March 1992, I led an interagency US Government team to the region to discuss terrorist threats and upgrading aviation security. While at our Embassy in Buenos Aires, we had a sit-down with the Chief of Station–Bill. I told Bill that the only intel we had seen at that point of time was from a liaison service and indicated that Hezbollah was behind the attack. I asked Bill if they were having any luck going after Hezbollah.

Bill's answer stunned me–he said "no, it was not part of the collection plan." In Bill's world (and that of other intel community bureaucrats operating as intel collectors), your annual evaluation determines whether you get promoted and make more money. A key part of that evaluation, especially for a Chief of Station, is measuring how well you did in providing the sources and reports that met the priorities identified in the collection plan. You did not get praised or rewarded by diverting intelligence resources to an issue or target not on the collection plan. Since Hezbollah was not on the plan when the bomb went off in Buenos Aires, the CIA was not collecting intel or trying to recruit sources to get such intel. The intel the U.S. Government was getting on Hezbollah in South America was coming to us from other governments.

I returned to Washington, DC and wrote Hezbollah in South America as a collection priority, it was added subsequently to the overall collection plan. Never forget that bureaucratic processes and procedures reign supreme in both the intel and FBI worlds.

I want you to look at the list of the people who unmasked Flynn in the aftermath of the 2016 election and look specifically at the number of separate reports that contained Flynn's name. Thirty nine separate people asked 14 different days for the NSA to tell them the identity of the "unnamed" American cited in the intelligence report he or she was reading. In response to those requests Michael Flynn's name was revealed or "unmasked" to those 39 people.

The document declassified by DNI Grenell shows that there were 14 unique days when the NSA received requests to "unmask"–the first was on 30 November 2016 by UN Ambassador Samantha Power and the last came on 12 January from Joe Biden. There were two separate requests on the 14th of December by Samantha Power, which indicates two separate NSA reports. Samantha Power would not have to submit two requests for the same document.

The documents that had the name of Michael Flynn were formal NSA intelligence reports. They were purposefully created either in response to a U.S. intelligence community collection plan or were produced by a foreign intelligence outfit, in this particular case an organization like the British version of the NSA–the GCHQ. GCHQ could easily identify Michael Flynn or anyone else tied to the Trump team as a valid target for collection. Signals or communication intelligence collected by the Brits from targeting Michael Flynn would be put into a British intelligence report and then passed to the NSA. NSA officers are co-located in the UK with GCHQ. There is no prohibition on the NSA accepting "liaison" reporting from GCHQ and then disseminating it people with appropriate clearances throughout the U.S. Government.

Here is an example of the kind of report that one of the people wanting to unmask Michael Flynn might have seen:

After reading this report you want to know, "who are the redacted names?" That is how an unmasking request starts.

What is so unusual and bizarre is that there are at least 14 different NSA intelligence reports with Michael Flynn's name popping up in a 45 day period. That is not accidental or incidental. If you are driving down the road and your car breaks down and you go to a nearby bar to call for a tow and see your pastor in the bar with your neighbor's wife, that is accidental or incidental intelligence collection.

What happened to Michael Flynn is akin to the jealous husband hiring a private investigator to follow his wife and find out who she is sleeping with. That is not incidental. That is purposeful.

The intelligence collection and creation of intelligence reports in the NSA were not incidental nor accidental. It was done with a purpose and with the help of foreign intelligence.

As I noted in an earlier article, the fact that Michael Flynn's December 29 conversation with the Russian Ambassador is missing from this list could have been because the material was before a Grand Jury and/or it was collected by the CIA. Thanks to Andy McCarthy's explanation, the Grand Jury explanation is probably not valid. That leaves the CIA, which means John Brennan's CIA did it using something like the Special Collection Service. Ed Snowden described capability in his book:

“I remember sitting on the left bank of Lake Geneva with the local personnel of the SCS, or Special Collection Service, a joint CIA-NSA program responsible for installing and operating the special surveillance equipment that allows US embassies to spy on foreign signals. These guys worked down the hall from my vault at the embassy, but they were older than I was, and their work was not just way above my pay grade but way beyond my abilities—they had access to NSA tools that I didn’t even know existed.”

The people in the intelligence and law enforcement community, current and former, that were spying on Donald Trump and his team want you to believe that nothing untoward or wrong was done. That is the ultimate lie. I hope the preceding explanations help you see that fact.