The H-4 airbase in Jordan 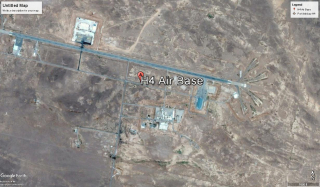 "This airfield was built to support the H4 oil pumping station of the Mosul–Haifa oil pipeline built by the Iraq Petroleum Company between 1932 and 1934 in the Emirate of Transjordan at that time a protectorate of the British Empire. The airfield was used by the RAF during World War Two as the Advanced Headquarters for operations against the rebels in Iraq during the Anglo-Iraqi War. The Airbase is now operated by the Royal Jordanian Air Force.[1]

Between November 2014 and January 2015, the United States began positioning MQ-9 Reaper UAVs at the base.[1]

The base also houses AH-1F Cobras, believed to be from the 10th and 12th Squadrons of the Royal Jordanian Air Force, and a Cessna 208B Caravan from the 15th Squadron.  wiki

As air bases go in the ME this is an old one.  It was probably originally a highway landing strip built by the RAF during the British mandates in Palestine, Transjordan and Iraq.  It was built along the line of the Iraq Petroleum Company pipeline and road from Kirkuk to Haifa.  The town is a few kilometers south of the air base.  It has an official name but in my time out there the Jordanian beduin just called it "ashfour,"  (H4).

This base has been much improved and expanded since 9/11 with American money.  IMO this is probably the base that Trump referred to last week when he said he would move a lot of the SOF people to an airbase outside Syria.  It is a good operating location, protected by the excellent Jordanian military and within easy operating range of Syria 80 kilometers away.

Combined with the US forces at al-asad airbase in Iraq (where Trump visited) and the artillery and road blocking positions that I posted on as linked,  this would IMO constitute a viable base situation in that part of the ME for continued CT operations rather than the Neo-imperialism of the neocons both in and out of uniform.

I took a delegation of West Point cadets to Jordan during the time I taught there.  We visited Qasr Burqa , a Roman Army auxiliary cohort fort about 20 kilometers NW of "ashfour."  We had a Jordanian Badia (desert) policeman with us and a sergeant from the USDAO in Amman.  It is a lovely place with a little lake that is a stop on the Russia to Africa flyway for migratory birds.  They come there in millions, ducks, ducks everywhere.  Sir John Bagot Glubb told me (RIP) that he spent many happy times at Qasr Burqa.  pl