Posted on September 28, 2019 by Andrei Martyanov 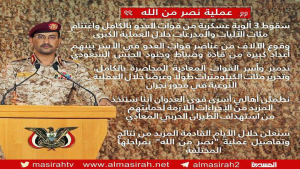 Many of you have already passed the word of the Yemeni defeat of three Saudi brigades. Here is the description of this victory from the English edition of the Yemeni Almasirah Media Network.

Speaking at a press conference in the capital Sana’a on Saturday evening, Brigadier General Yahya Saree described the major and efficient operation, dubbed Victory from Allah, as the biggest-ever since Saudi Arabia and some of its allies embarked an atrocious military campaign on Yemen more than four years ago, noting that the offensive lasted several months and inflicted dramatic losses – both in terms of military hardware and personnel – upon the enemy, the media bureau of Yemen’s Houthi Ansarullah movement said in a statement.

“The operation resulted in the complete destruction of three military brigades of the enemy (Saudi) forces, seizure of large quantities of military equipment, including hundreds of vehicles and armored vehicles, capture of thousands of enemy forces, mostly traitors and the beguiled (Saudi sponsored Yemeni militiamen loyal to Yemen's former president Abd Rabbuh Mansur Hadi). Hundreds more were killed and wounded in the process as well,” Saree pointed out.  (Almasirah English)

The Arabic language version of Almashirah had a few more details. I got these details only through Google Translate. This was another well planned operation aimed to lure the Saudis into a trap before annihilating them within 72 hours of the commencement of the operation. In other words, the Saudi forces were not only out-fought by the plucky little hill people, but they were out-witted, out-planned and out-campaigned by the Houthis. The Houthis employed “specialized” units of the Yemeni Army including “rocket power and air force marching and defense Aerial” [Google translate results]. I'm sure Colonel Lang or another Arabic speaker here can give a better translation.

The Houthi forces had to protect their prisoners from ensuing Saudi airstrikes. I suspect the captured Yemeni militiamen loyal to Yemen's former president Abd Rabbuh Mansur Hadi and other mercenary prisoners will no longer be supporting the Saudi Royals after being targeted by the Saudi Air Force. Many may decide to come over to the Houthi side rather than remain POWs.

This same Yemeni Army brigadier general speaking today mentioned Yemeni Armed Forces possessed enough drones, rockets and cruise missiles to last two years when he introduced these weapons several months ago. Between this fact and today’s Houthi ground victory, it is no surprise the Saudis are accepting the ceasefire.

Spin that, you miserable royal bastards!

Almashirah said there will be a more in depth briefing on Operation Victory from Allah tomorrow.

This entry was posted in Saudi Arabia, TTG, Yemen. Bookmark the permalink.