40% of French electricity is from nuke plants. 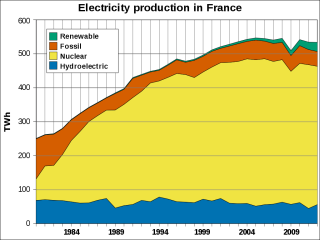 France exported 38 TWh of electricity to its neighbours in 2017.[6] France becomes a net-importer of electricity when demand exceeds supply, in rare cases of very inclement weather, because of the lack of more flexible generating plants."  wiki

Chernobyl! Fukushima! Three Mile Island!   I can hear the outcry from right here.  Oh, scuse me!  Raht heah!.  (language notation for you all.  Well , some of you all)  This reminds me of the blonde TV dummy recently reporting from Rheims on the women's soccer championship who batted her blue eyes at the camera and said that she just couldn't understand why the locals didn't say Reems when mentioning the city.  She said that they unaccountably pronounced the name as "Hann."  Sweet Jaysus,  Are they actually paying this creature?

Seriously, the French electricity company is tightly controlled and largely owned by the government.  Security is tight and lethal.  There is continuous ongoing reactor safety research and installation of product improvements and guess what?  There is NO pollution.

Well, duh!  If we went down that road maybe we could start exporting electricity as well as oil/gas.  pl

This entry was posted in France, Science, The economy. Bookmark the permalink.

22 Responses to 40% of French electricity is from nuke plants.