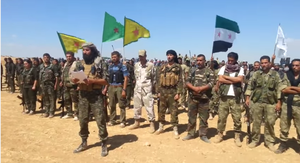 21:42 06.04.2016(updated 21:49 06.04.2016)   The Syrian Democratic Forces, including elements of the Kurdish people's protection units (YPG), are preparing to launch a large-scale operation to liberate the strategically important city of Manbij, about 35 km from the Turkish border in the northwestern Aleppo province, from the Daesh (ISIL) militant group.

According to information received by Sputnik Kurdish from the SDF command, the operation, which will be assisted by air support from the US-led anti-terrorist coalition, aims at liberating the city, which serves as a major stronghold for the Daesh jihadists in northwestern Syria, and is an intersection of several major highways, including the M4.

The operation was expected to begin last month, but was delayed due to Turkish opposition, Sputnik Kurdish explained. Ultimately, Washington is believed to have pressed Ankara into accepting the need for the operation, and active preparations, including the delivery of heavy weapons, have begun south of the Kobani Canton. (Sputnik News)

When Erdogan came to Washington last week to attend the Nuclear Security Summit, he was hoping to have a face-to-face meeting with Obama. I have the feeling Erdogan got a lot more than just a snub from the Obama Administration. For him to suddenly acquiesce to this YPG/SDF push to Manbij and beyond, he must have received a painfully rude message from the Administration to curb his support for IS or face some serious consequences. As my old friend MSG Rivers would say, “The shit’s on, good buddy.”

22 Responses to Closing the Door – TTG